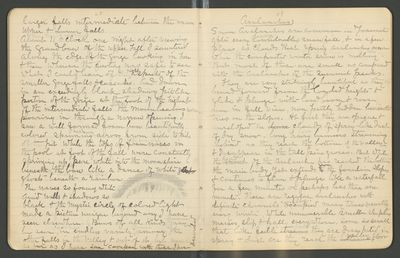 [About 11 o clock one night] Once [around] midnight after viewing the grand bow of the Upper Fall I sauntered along the edge of the gorge looking in here & there wherever the footing was safe to see what I could learn of the night aspects of the smaller gorge falls & cascades. And down in an exceedingly black shadowy pitlike portion of the gorge at the foot of the highest of the intermediate falls where the moonbeams were pouring in through a narrow opening I saw a well formed foam bow beautifully colored [spanning] arching across from side to side of the pit while the tops of the pure white foam waves in the pool at foot of the fall were constantly springing up [colored pure white] into the moonshine beneath the bow like a dance of white ghosts [beneath a rainbow] the arch of irised spray

The waves so foamy white amid walls & shadows so black & the mystic circle of colored light made a picture unique beyond any I have seen elsewhere. [Bows of all kinds may be seen] color bows in endless variety illumine [among] all the other falls in the valley & out of it, but none so far as I have seen compare with these I have described

Snow avalanches are common in Yosemite after every heavy [considerable] snowfall, & in a few places, as Clouds Rest Spring avalanches occur when in bright warm weather or during the fall of heavy rain the compacted winter snow is melting, so that they may be seen. But most of these are small as compared with the avalanches of the summit peaks.

They are very strikingly beautiful as they slip & bound forward from the loaded heights & glide & plunge with loud boom & roar now in full view, now partly hidden [beneath] by trees on the slopes. At first they are opaque & enveloped in [dense] clouds of spray like dust of dry snow, long [hairy] loose banners streaming behind as they reach the bottom of the valley & disappear in the tall pine groves. But while the head [snout] of the avalanche has reached the bottom the main body yet extends from [to] the fountain slopes & continues to flow & plunge like a waterfall for a few minutes or perhaps less than one minute. These are regular avalanches with definite channels usually occupied many times [usually] every winter, while innumerable smaller shapeless masses slop & fall everywhere. Some so small that like feeble [streams] waterfalls they are dissipated in spray & dust ere they reach the [bottom] valley floor