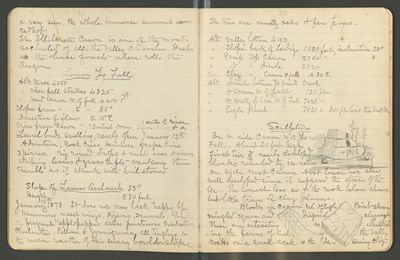 The Illilouette Canon is one of the most secluded of all the valley chambers. Hushed as the dense forests where rolls the Oregon

First tier of nearly developed blocks rounded by ice-action on side next Canon Next lower tier also well developed since it suffered the stress of the ice. The lowest less so & the rock below shows but little trace of clvg [cleavage] planes.

These are interesting as illustrating the forms of most of the valley rocks on a small scale & the determining clv’g [cleavage].