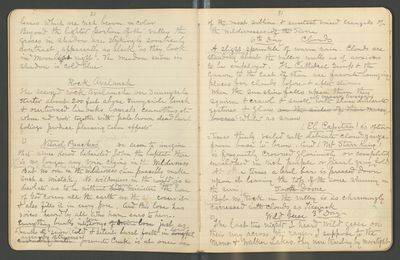 leaves which are rich brown in color

Beyond the lighter portion of the valley the groves in shadow are strikingly sombre by contrast, apparently as black as they look in a moonless night. The meadow snow in shadow is cold blue.

But no one in the wilderness can possibly make such a mistake for every one of these flrs [flowers] is such a voice. No wilderness in the world is so desolate as to be without [Gods] divine ministers God’s [the] love of God covers all the earth as the sky covers it & also fills it in every pore. And this love has voices heard by all who have ears to hear. Everything breaks into love songs [of divine love] just as snow banks [of] in the spring (cold & silent) burst forth in [songful cascading water] loud rejoicing streams. Yosemite Creek is at once one

A slight sprinkle of warm rain. Clouds are [standing] wandering about the valley walls as if anxious to be employed. The Cathedral Group & the Canon to the East of them are favorite lounging places for clouds before & after storms

El Capitan is often-times thinly veiled with delicate cloud-gauze from base to brow. And Mt [Mount] Starr King is frequently crowned gloriously or completely enveloped in rich purple or pearl gray folds

The last two nights I heard wild geese on their way across the range, I suppose to the Mono & Walker Lakes. They were traveling by moonlight