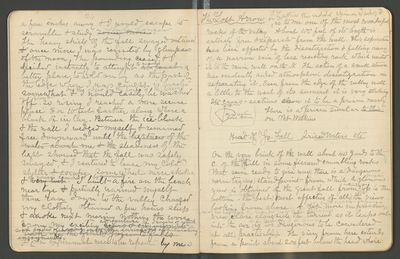 The heavy skirts of the fall swayed outward [&] once more I was revisited by glimpses of the moon, the pounding ceased, & I decided instantly to attempt to reach [at least] a better place to hold on by as the part of the ledge where I was caught is beveled somewhat on the edge by the force of the torrent & I would easily be washed off in flood. So rising I reached a more secure place on the ledge [8] or 10 feet farther along where a block of ice lay. Between the ice-block & the wall I wedged myself & remained face downward until the [lightness of the water about me & the] steadiness of the light showed that the fall was safely swayed, & I ventured to leave my cold shelter [& escape] somewhat nerve shaken & [very wet] of course drenched and benumbed. I built a fire on the bench near bye [nearby] [&] partially warmed myself then ran down to the valley changed my clothing obtained a few hours sleep & awoke next morning nothing the worse from my exciting adventure the dangers of which soon faded leaving only the enriching exhilarating enjoyments [fears & enjoyments back of the grand Yosemite falls].

[I] (An experiment never to be repeated by me.)

The Lost Arrow or rather the isolated spire on W [west] side of it is to me one of the most wonderful rocks of the valley About 100 feet of its length is entirely free & separate from the wall. This separation has been effected by the disintegration & falling away of a narrow vein of less resisting rock which united it to the main wall on the N [north]. The action of a small stream has evidently aided atmospheric disintegration in separating it. Seen from the edge of the valley wall a little to the west of its summit it is very striking

Its cross-sections show it to be a prism nearly

There is a similar prism [to this] on Mt [Mount] Watkins

On the very brink of the wall about 40 yards to the E. [east] of the upper fall in some fissured crumbling rocks (that seem ready to give way) there is a (dangerous) (nerve trying) standpoint from which a (glorious) fine view is obtained of the great fall from within 200 f [feet] of the top to the bottom, perhaps the (best) (most effective of all) the views looking from above. A [yet] more impressive but nerve-trying view may be had from the rounded brow of the precipice[s] close alongside the torrent as it leaps out into the air at the beginning of its descent (is too dangerous to be considered (at all) practicable). The view from here extends from a point about 200 feet below the head where