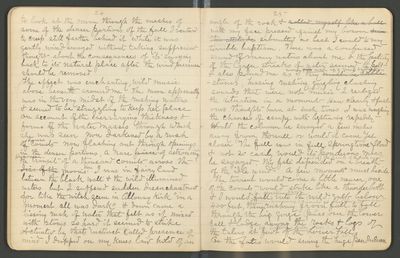 The effect was enchanting, wild music above beneath around me the moon apparently was in the very midst of the rushing waters & seemed to be struggling to keep her place on account of the ever varying thickness & forms of the water masses through which she was seen now darkened by a rush of dense comets now flashing out through openings in the denser portions, a rare [piece of] astronomical phenomenon, the transit of a thousand comets across the [disc of the] moon’s disc. I was in fairy land between the black wall & the wild illumined waters but I suffered sudden disenchantment for like the witch scene in Alloway Kirk “in a moment all was dark” [&] down came a hissing rush of water that felt as if mixed with stones so hard it seemed to strike [Actuated by that] instinctively [called presence of mind] I dropped on my knees laid hold of an

angle of the rock & [rolled myself like a ball] with my face pressed against my bosoms [& in this attitude] submitted as best I could to my [terrible] [thundering] baptism. There was a confused sound of many waters about me & the pelting of the larger streaks of water seemed to pelt & also pound me as if they [must be cobblestones] were [fall] made up of granite & cobblestones, hissing rushing gurgling clashing sounds that were not heard as music I realized the situation in a moment How clearly & fast ones thoughts burn at such times I was weighing the chances of escape with lightning rapidity

The torrent would come a little nearer, one of the comets would strike like a thunderbolt & I would [fall] be stricken down into the (wild) gulf below [400 feet], thence [rushing] [down] & I would go below rumbled from fall to fall through the big gorge (pass) & over the lower fall & lodge among the rock & logs of the talus at the bottom valley 1000 ft below foot of the Lower Fall.

Or the fates would swing the (huge) fall like a pendulum