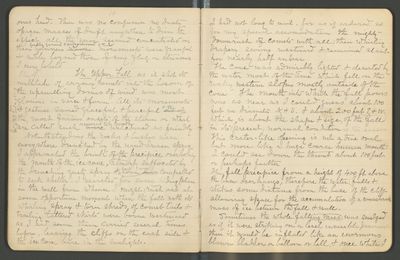 ones head. There was no confusion no dusty opaque masses of drift anywhere to dim the effect all the snow seemed concentrated on these banners [whose] finely formed & proportioned & their movements were graceful & noble beyond those of any flag or streamer I ever beheld

The Upper Fall as it shot its multitude of arrowy comets into the bosom of the upswelling domes of wind was most glorious in voice & form. All its movements & sections seemed graceful & peaceful [as if] & the most furious onsets of the storm or what are called such [were] seemed to be fondly welcomed as friendly

Notwithstanding the rocks & bushes were everywhere drenched by the wind-driven spray I approached the brink of the precipice overlooking the mouth of the ice cone, but I was almost suffocated by the drenching gusty spray [& was] soon compelled to seek shelter. I searched for some hiding place in the wall from whence I might (rush) run out at some opportune moment when the fall with its whirling spray & torn shreds of comet tails & trailing tattered skirts were borne westward as I had seen them carried several times before, leaving the cliffs on the east side & the ice cone bare in the sunlight.

I had not long to wait, for as if ordered so for my special accomodation [accommodation] the mighty downrush of comets with [all] their whirling drapery swung westward & remained slant for nearly half an hour

The cone was admirably lighter & deserted by the water most of the time which fell on the rocky western slopes mostly outside of the cone The mouth into which the falls pours was as near as I could guess about 100 feet in diameter N. & S. [north & south] & about 200 feet E & W. [east & west] which is about the shape & size of the fall in its [present] normal condition at this season

This crater-like opening is not a true oval but more like a huge coarse [human] mouth. I could see down the throat about 100 feet or perhaps farther

The fall precipice from a height of 400 feet above the base overhangs, therefore the water (falls &) strikes some distance from the base of the cliff allowing space for the accumulation of a considerable mass of ice between the fall & wall.

Sometimes the whole fall(ing mass) was [smudged] as if it were striking on a level invisible pavement then it would be inflated like an enormous blown bladder or balloon or bell, & once while I