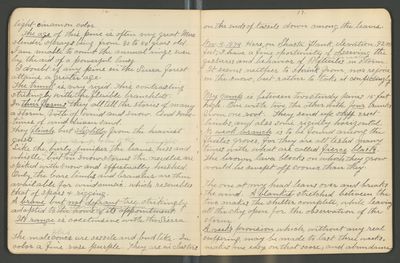 The age of this pine is often very great. More slender sprays being from 30 to 50 years old.

I am unable to count the annual rings, even by the aid of a powerful [lense] [lens]. I doubt if any pine in the Sierra forest attains a greater age.

The trunk is very rigid. This contrasting strikingly with the flexible branchlets.

In their forms they all tell the stories of many a storm, both of wind and snow. And sometimes of wind driven sand.

They flinch but slightly from the heaviest gusts

Like the burly juniper slender [ ] & lvs [leaves] of the the leaves & branchlets hiss and whistle in the wind but in snowstorms the needles are spiked with snow and effectually hushed. Only the bare limbs and branches are the available for wind music which resembles that of spars & rigging.

A brave but not defiant tree strikingly adapted to its strong home [the home of its appointment. Its range is coextensive with the Sierra.

The male flrs [flowers] [cones] are sessile and bud like. In color a fine rose purple. They are in clusters

On the ends of tassels down among the leaves.

Nov. 4, 1874 Here, on Shasta flank, elevation 9200 feet, I have a fine oportunity [opportunity] of observing the gestures and behavior of P. [Pinus] [flexilis] albicaulis in storm. It seems neither to shrink from, nor rejoice in the storm; but rather to take it confidingly.

My camp is between two sturdy pines 15 feet high. One with two, the other with four trunks from one root. They send up stiff erect limbs, and also some rigidly horizontal. No weak branch is to be found among the flexilis groves, for they are all tested many times with what are called fierce blasts. The brown lava blocks on which they grow would be swept off sooner than they.

The one at my head leans over and breaks the wind. A blanket stretched between the two makes the shelter complete, while leaving all of the sky open for the observation of the storm.

A week’s provision which, without any real suffering, may be made to last three weeks, makes me easy on that score; and abundance