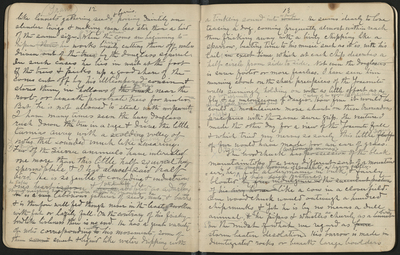 (Trans) like linnets gatherings seeds & berries poising daintily on slender twigs & making even less stir than a bird of the same size. trans ahead When the cones are beginning to ripen [then] he works hard busily cutting them off, unless driven away [out of the trees] by the Douglas squirrel. In such cases he lies in wait at the foot of the trees & picks up a good share of the cones cut off by his ill tempered cousin & stores them in hollows of the trees [the trunk] near the root or beneath prostrate trees for winter use. But he is not allowed to steal with impunity. I have many times seen the busy Douglas rush down [the] a tree in a rage & drive all the little Tamias away with a [scolding] valley of notes that sounded much like scolding or swearing (X begin) Few of the Sierra animals have interested me more than this little half squirrel half spermophile, & I had almost said half bird. He is so gentle [and] confiding in industrious he takes one's heart [is won] & gets himself [he is] adopted as adoringly though weighing hardly more than a mouse. He is a [very] laborious gatherer of seeds, nuts & burrs & is therefore well fed though never in the least swollen with fat or lazily full. On the contrary of his frisky bird-like liveliness there is no end. He has a great variety of notes corresponding with [to] his movements, some of them [sound] sweet & liquid like water dripping with

a tinkling sound into a pool [water]. He seems dearly to love teasing a dog, coming frequently almost within reach then frisking away with a lively chirping like a sparrow, beating time to his music such as it is, with his tail [in exact time], which at each chip describes a half circle from side to side. Not even the Douglas is surer footed or more fearless. I have seen him running about on the sheer precipices of the Yosemite walls seemingly holding on with this little effort as a fly have apparently & as unconscious of danger when if he made the slightest slip he would have fallen 2000 or 3000 feet. How fine it would be could a mountaineer move about on these tremendous cliffs [precipices] with the same sure grip. The venture I made the other day for a view of the Yosemite fall & which tried my nerves so sorely this little Tamius [fluff of fur] would have made for an ear of grass.

(X Trans) The woodchuck (Arctomys monax) [has possession of] the bleak mountaintops & a very different sort of mountaineer is he, the most bovine of rodents, a heavy eater, in his high pastures fat aldermanic in bulk & fairly bloated [by free indulgence in the succulent pastures of his airy home] like a cow in the cloverfield. One woodchuck would outweigh 100 chipmunks & yet he is by no means a dull animal. [&] he pipes & whistles as cheerily as a bird [linnet] in the midst of what we regard as [pure] storm beaten desolation. His burrow is made in disintegrated rocks or beneath large boulders