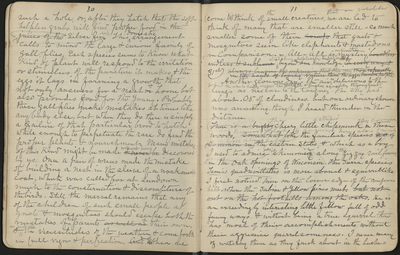 such a whole, or, after they hatch that the soft helpless grubs will find proper food in the silver fir sap [the juices of the]. This domestic arrangement calls to mind the large & curious family of gall flies. Each species seems to know what kind of plant will respond to the irritation or stimulus of the puncture it makes & the eggs it lays in forming & growth that not only answers for a nest & [or] home but also provides food for the young. Probably these gallflies make mistakes at times like anybody else, but when they do there is simply a failure of that particular brood to hatch while enough to perpetuate the race do find the proper plants & nourishment. Many mistakes of this kind might be made without being [and never be] discovered by us. Once a pair of wrens made a mistake of building a nest in the sleeve of a workman’s coat, which was called for at sundown much to the consternation & discomfiture of the birds. Still the marvel remains that any of the children of such small people as gnats & mosquitoes should escape both the mistakes of the parents [as well as] & their own as well as [and] the vicissitudes of the weather & come forth in full vigor & perfection. [And] When we

(come to) think of the small creatures that are visible, we are led to think of many that are smaller still, so much smaller some of them [comp] that gnats & mosquitoes seem like elephants & mastodons in comparison. All. All is infinite mystery [boundless endless & sublime] stretching hopelessly indefinitely beyond [our] knowledge [in every way & always leaving the impression that they are more especially in the hands of loving Nature [thorn/than] the bigger human people]

31st) Another glorious day. The air is delicious to the lungs as nectar to the tongue instead the whole body seems homogeneous one palate & tingles equally throughout. The sky had about .05 of cloudiness. But our ordinary shower was awanting though & I heard thunder in the distance.

[There is a bright] The cheery little 4 striped chipmunk so common in these woods around Brown’s Flat is common here also really with light airy habits [somewhat like] the familiar species [so] of [common in] the eastern states [and] which as a boy I used to admire as it skimmed[ing] along the zigzag rail fences in the Oak openings of Wisconsin. These Sierra species Tamias Quadrivittatus is more arboreal & squirrel-like. I first noticed him on the lower edge of the coniferous belt where the Sabine & yellow Pines meet. [but not out on the hot foothills among the Oaks]. He is an exceedingly interesting little fellow full of odd funny ways & without being a true squirrel [he] has most of their accomplishments without their aggressive quarrelsomeness. I never weary of watching them as they frisk about in the bushes