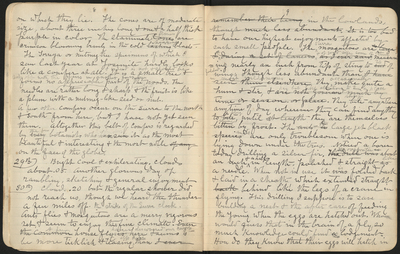 on which they lie. The cones are of moderate size, about 3 inches long & 1 & 1/2 thick, purple in color. The staminate flowers [cones] are crimson blooming bravely in the cold [lashing] shearing blasts. The Torreya or nutmeg tree specimens of which I saw last year at Yosemite hardly looks like a conifer at all & indeed is not & should be set off with the yews in another family. It is a small tree & forms no appreciable part of the woods. The needles are sharp, rather long & pointed & the fruit is like a plum with a nutmeg-like seed or nut.

A few other conifers occur on the Sierra to the north & south from here, but I have not yet seen them. Altogether this belt of conifers is regarded by the few [every] botanists [who have seen] it as the most beautiful & interesting & the most noble [of any] on the face of the globe.

30th) Clouds .20 but the regular shower did not reach us, though we heard the thunder a few miles off. The strike of the Sierra clock. Ants, flies & mosquitoes are a merry vigorous set & seem to enjoy this fine climate. [Even the common] A few houseflies have discovered our camp [is here] & seems to be more ticklish & teasing up here than [I ever]

[remember their being] in the lowlands, [though much less abundant. It is too bad] to have our highest enjoyment affected by such small people. The Sierra mosquitoes are [as large & as daring a set of lancers] & of good size some of them [as I ever saw] measuring nearly an inch from tip of sting to top [end] of folded wings. Though less abundant then [I have seen them elsewhere] in most wildernesses. They occasionally make quite a hum & stir, & pay but little attention to time & place [and are not governed much by time or season or place.] They sting [bite] anywhere, anytime of day wherever they can find anything to sting [bite] until [at length] they are themselves stung [bitten] by frost. The [ants a] the large jet black ants [species] are only troublesome when one is lying down under the trees. Noticed a borer today drilling a silver fir. [this drill was] It's ovipositor [is/was] about an inch & a half in length, polished & straight like [as] a needle. When not in use it was [is] folded back & laid in a sheath which extends[ed] straight [back] behind like the legs of a crane in flying. This drilling I suppose is to save building a nest & the after care of feeding the young when the eggs are hatched out. Who would guess that in the brain of a fly, so much knowledge can find [a] lodgment. How do they know that their eggs will hatch in