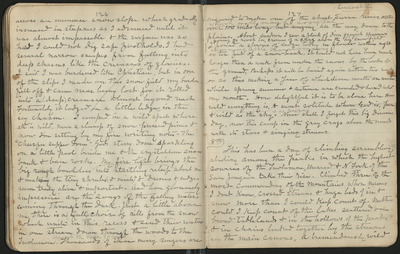 across an immense snow slope which gradually increased in steepness as I advanced until it was almost impassable & the surface was so hard I could not dig safe footholds. I had several narrow escapes from falling into deep chasms like the crevasses of glaciers. I said I was burdened like Christian, but in one of the slips I made on this snowfield my burden fell off & came near being lost for it rolled into a (deep) crevasse almost beyond reach. Fortunately it lodged on a little ledge in the icy chasm. I camped in a wild spot where all is wild, near a clump of snow pressed pines & now I’m sitting by my fire writing notes – the “cheerful supper done” God’s starry dome sparkling on a little pool beside me & the crystalline snow bank & bare rocks. My firelight brings the big [rough] boulders about me into startling relief makes[ing] the tiny shrubs (& mints) & daisies & sedges seem truly alive & important. & how gloriously impressive are the songs of the falling waters coming through the dark. Just a little above me there is a (full) choir of rills from the snow which unite in this recess & send their waters in one stream down through the woods to the Tuolumne opposite the Soda Springs. Thousands of these merry singers are

required to make one of the short Sierra rivers, which well may be songful [not over 100 miles long but singing] all the way down to the plains. About sundown I saw a flock of dim grayish sparrows, Leucosticte going to roost in crevices of a crag above the big snowfield. Charming little mountaineers. I found a species of sedge today in flower within eight or ten feet of a snowbank. It could not have been much longer than a week from under the snow by the looks of the ground. Perhaps it will be buried again within two weeks or so thus making a year of which eleven months are winter while spring summer & autumn are crowded & hurried into one month. How delightful it is to be alone here. How wild everything is. Wild as the sky & as pure. A sweet solitude [where God it, pure]. Never shall I forget this big divine day, nor this camp in the gray crags above the woods with its stars & [singing] streams.

8th) This has been a day of climbing scrambling sliding among the peaks in which the highest sources of the Tuolumne, Merced & N [north] Fork of the most commanding of the mountains whose names I don’t know, crossed streams & huge beds of ice & snow more than I could keep count of. Neither could I keep count of the lakes scattered on [broad] tablelands & in the hollows of the peaks & in chains linked together by the streams in the main canyons, a tremendously wild