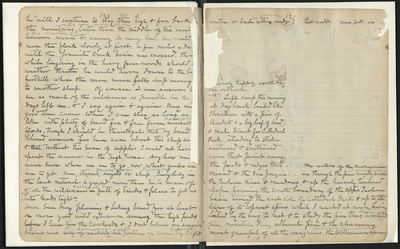 he “will I venture to stay [this] so high & far back in the mountains as we now are later than the middle of this month no matter how [however] warm & sunny it may be.” He would move the flock slowly at first, a few miles a day until Yosemite Creek basin was crossed, then while lingering in the heavy pine woods should [ ] weather threaten he could hurry down the [br…] foothills where the snow never falls deep enough to smother sheep. Of course I am anxious [to] see as much of the wilderness as possible in the [few] days left me & I say again & again may [with] good time come when I can stay as long as I like with plenty of bread far & free from the trampling [miserable] flocks though I should be thankful that my bread blessed summer has been sure about this sheep [can] & that without this base of supplies I could not have spent the summer in the High Sierra. Anyhow we never know where we are to go nor what guides we are to get men, storms, guardian angels or sheep. Perhaps everybody in the least natural is guided more than he is aware of & all the wilderness seems to be [is] full of tricks & plans to get us into God’s light.

venture or bride or groom getting ready [together] [wedding] ever felt so [nervously] happlily excited by the outlook.

7th) Left camp this morning at daybreak [loaded like Christian with a pair of blankets & a big loaf of bread & made direct for Cathedral Peak, intending to strike eastward & southward from that point among the peaks & ridges that [ ] the waters of the Tuolumne, Merced & the San Joaquin [&] [down] through the pine woods, I made my way across the Tuolumne River & meadows & up the heavily timbered slope forming the south boundary of the Upper Tuolumne basin along [around] the east side of Cathedral Peak & up to [the base of] its topmost spire[s], which I reached at noon, having loitered by the way (to rest and) to study the fine trees, the two leaved pine, mountain pine, albicaulis pine & the charming most graceful of all the evergreens the Mountain Hemlock [Williamson spruce]