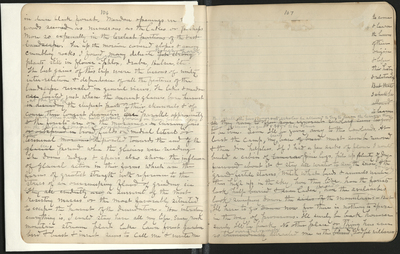 in dense black forest. Meadow openings in [the] woods seem[ed] as numerous as the lakes or perhaps more so [especially in the levelest portions of the vast landscape.] For up the moraine covered slopes & among crumbling rocks I found many delicate though hardy [yet strong] plants still in flower – eriogonum, phlax, draba, ibulsen, etc. The best gains of this trip were the lessons of unity, interrelation & dependence of all the features of the landscape revealed in general views. The lakes & meadows are located just where the ancient glaciers bore heaviest at the foot of [in descending] the steepest parts of their channels & of course their longest diameters are approximately parallel with each other & with the belts of forests growing on them, [forming long] on the lateral & medial. & the forests are on the moraines [in] curving lines [or outspread in] broad beds or outspread fields on medial lateral or [the] terminal [moraine] deposited towards the end of the ice [glacial] period when the glaciers were receding. The domes ridges & spurs also show their influence of glacial action in their forms which evidently are the forms of greatest strength with reference to the stress of an oversweeping flood of grinding ice [They all evidently are] a survival of the most resisting masses or the most favorably situated to escape the heaviest of the denudation. How interesting everything is, I could stay here all my life. Every rock mountain stream plant lake lawn forest garden bird & beast & insect seems to call me & invite me

to come & learn the lessons of their origin & life their history & relationship [But that I shall be allowed to learn all they have to offer poor ignorant scholarship seems top good] But shall the poor ignorant scholar be allowed to try to learn the lessons they offer? It seems too good to be true. Soon I’ll be going away to the lowlands. At least the camp, my bread base [of bread] must soon be removed & then I’m helpless. If I had a few sacks of flour I would build a cabin of [tamarac] pine logs, pile up plenty of dry firewood about it & stay all winter to see {arrows} the snow & avalanches & the grand fertile storms, watch what birds & animals winter this high up in the sky, how they live, how the forests look [half buried] & snow laden buried or, how the avalanches look sweeping down the [sides of] the mountains – But now I’ll have to go [down now] for there is nothing to spare in the way of provisions. I’ll surely be back however surely I’ll be back No other place or thing has ever so overwhelmingly [tremendously] attracted me as this hospitable [blessed] Godful wilderness.