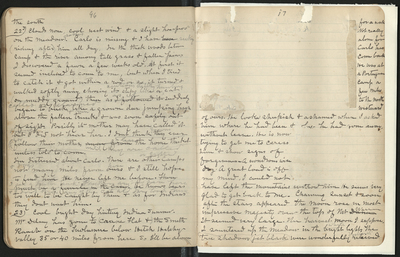 22nd) Clouds none, cool west wind & a slight hoarfrost on the meadow grasses. Carlo is missing & I have [been] seeking (riding after) him all day. In the thick woods between camp & the river among tall grass & fallen pines I discovered a fawn a few weeks old. At first it seemed inclined to come to me, but when I tried to catch it & got within a rod or so, it turned & walked softly away choosing its steps like a cautious, stealthy hunting cat [on muddy ground] then as it [I followed it] suddenly called on alarmed began to buck like a grown deer jumping high above he fallen trunks & was soon [safely] out of sight. Possibly its mother may have called it though [but] I did not hear her. I don’t think fawns [they] ever leave the home thicket or follow their mothers until they are called or frightened [away from] [unless told to come].

I’m distressed about Carlo. There are other camps & dogs not many miles from here [ours] & I still hope to find him. He never left me before. [There must be a female in the case] I saw a panther track – panthers are very rare here & I don’t think any of the cats would dare touch him. He knows bears too well to be caught by them & as for Indians they don’t want him.

23) Cool bright day hinting Indian Summer. Mr. Delaney has gone to (Crane Flat and) the Smith Ranch on the Tuolumne below Hetch Hetchy Valley 35 or 40 miles from here so I’ll be alone

[sketch removed] for a week. Not really alone for Carlo has come back. He was at a Portuguese camp a few miles to the northwestward of ours. He looked sheepish & ashamed when I asked him where he had been & why he had gone away without leave. He is now trying to get me to caress him & show him signs of forgiveness. A wondrous wise dog. A great load is off my mind. I could not [sketch removed] have left the mountains without him. He seems very glad to get back to me. Charming sunset & soon after the stars appeared the moon rose in most impressive majesty over the top of Mt Warren [Dana]. It seemed very large. The harvest moon I suppose. I sauntered up the meadow in the white [bright] light. The jet black tree shadows were wonderfully distinct [relieved]