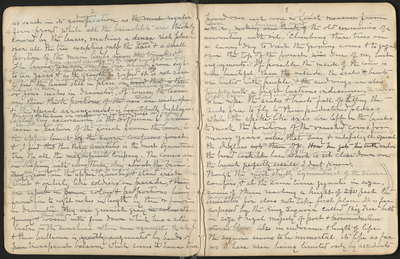 as exact in its divisions [ramification] as [the most regular] a fern-frond. While [all] the branchlets are thickly covered by the leaves, making a [dense] rich plush over all the tree excepting only the trunk [axis] & a small portion of the main limbs [near the trunk it] The leaves of the axis at the top [remain on the] turn upward especially on the upper branchlets & are stiff & sharp pointed on all the upper portion of the tree. They but vary a great a good deal in different trees as to stiffness & sharpness about from eight to ten years, & as the growth is rapid it is not rare to find the leaves still in place on [wood that is three] when it is three or four inches in diameter, wide apart. The upper part of the axis, of course, [the leaves on these thick portions of the axis there are wide apart] & their spiral arrangement is beautifully displayed. The leaf scars [of the leaves] are conspicuous for twenty years or more. After my excursion to Mt Hoffmann I had[ve] seen a complete cross section of the Sierra forest [from the lower to the upper limit of the Sierra coniferous forest]. & I find that this Abeis magnifica [Picea amabilis] is the most symmetrical tree of all the noble conifers [magnificent] company. The cones are grand affairs [in keeping with everything else about the tree. They are grow] superb in form size & color, cylindrical on the upper branches & stand erect [like] casks & are strict & orderly like soldiers on parade, [they are superb in form color & proportions being from] five to eight inches in length by three of four in diameter. [They are] greenish gray [in color when young and] They are covered with fine down which has a silvery luster in the sunshine [when against the sky] & their brilliance is [greatly] augmented by beads of [pure] transparent balsam which seems to have been

poured over each cone [in lavish measure from [above] a [vial] brining to mind [making one think of] the old ceremonies of anointing with oil. Climbing these trees on a sunny day to visit the growing cones & to gaze over the tops of the forest is [was] one of my best enjoyments. If possible the inside of the cone is more beautiful than the outside. The scales [and] bracts are tinted with the loveliest rosy purple & [the] seedlings [are also] purple with a bright lustrous iridescence. The seeds are dark brown ¾ of an inch long. When ripe the scales & bracts fall off setting the seeds free to fly to their predestined places while the spike-like brown axis is [are] left on the branches for many years to mark the positions of all the vanished cones, excepting those (have been) cut off when green by that busy indefatigable squirrel, the Douglass [cuts them off]. How he gets his teeth under the broad sessile [cask-like] base of the cone [which is set close down on the branch perfectly sessile] I don’t know.

(Trans & disperse or omit to pg 8) Though the most strictly symmetrical of the Sierra conifers all these conifers & at the same time gigantic in size. Some of them reaching a height of 240 [250] feet. The magnifica [Amabilis] fir does not take first place. It is far surpassed by the King Sequoia called “Big Tree” both in size & regal majesty of port & gesture [movement when storms blow.] Also in endurance & length of life. The Sequoia seems to be immortal, its life as far as I have seen being limited only by accidents