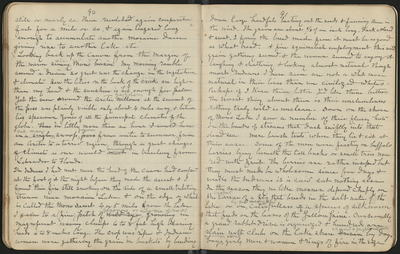 still or nearly so. Then receded[ed] again comparatively fast for a mile or so & again lingered long enough to accumulate another moraine dam giving rise to another lake, etc.

X Looking back up the canyon from the (margin of the (warm sunny sedge of the Mono plain [basin]. My morning ramble seemed a dream so great was the change in vegetation & climate. Here the lilies on the bank of the lake [creek] are higher than my head & the sunshine is hot enough for palms yet the snow around the Arctic gardens [willows] at the summit of the pass was plainly visible only about 4 miles away, & between lie[s] specimen of zones of all the principal climates of the globe. [This] In little more than an hour [I could have in a single] one may swoop down [pass] from winter to summer from & actric to a torrid region, through as great changes of climate as one would encounter [meet] in traveling from Labrador to Florida.

The Indians I had met near the head of the canyon had camped at the foot of it the night before they made the ascent & I found their fire still smoking on the side of a small tributary stream near Moraine Lake & on the edge of what is called the Mono Desert 4 or 5 miles from the lake I came to a (fine) patch of Elysius or Lyme grass [wild rye] growing in magnificent waving clumps 6 to 8 feet high bearing heads 6 to 8 inches long. The crop was ripe & Indian women were gathering the grain in baskets by bending

down large handful beating out the seeds & fanning them in the wind. The grains are about 5/8 of an inch long, dark colored & sweet. I fancy the bread made from it must be as good as wheat bread. A fine squirrelish employment this wild grain gathering seemed & the women seemed to enjoy it laughing & chatting & looking almost natural though most Indians I have seen are not a whit more natural in their lives that we civilized whites. Perhaps if I knew them better I’d like them better. The worst thing about them is their uncleanness. Nothing truly wild is unclean. Down on the shore of Mono Lake I saw a number of their flimsy huts on the banks of streams that dash swiftly into that dead sea. Mere brush tents where they lie & eat at their ease. Some of the men were feasting on buffalo berries lying beneath the tall bushes or small trees now red with fruit. The berries are rather insipid but they must needs be wholesome since for days & weeks the Indians it is said eat nothing else. In the season they in like manner depend chiefly on the big fat larvae of a fly that breeds in the salt water of the lake or on big fat corrugated caterpillars [of] a species of silkworm that feeds on the leaves of the yellow pine. Occasionally a grand rabbit drive is organized & hundreds are slain with clubs on the lake shore chased & frightened into a dense [crowd] [driven] by dogs, boys, girls, men & women & rings of fire in the sage