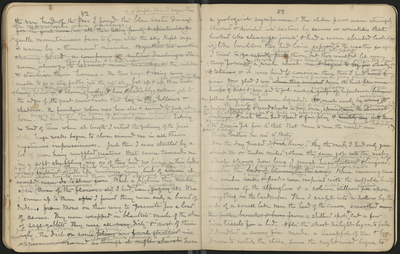 the very head of the pass I found the blue arctic daisy & purple flowerd bryanthus the mountains own darlings [for the first time in all their telling purity & spirituality] gentle mountaineers face to face with the sky kept safe & warm by a thousand miracles. [Bryanthus too another charming plant a company of natures darlings which] seem always the finer & purer [to become more beautiful] the wilder & stormier their homes. The trees touch & rosing seem unable to go a step farther into the cold sky but up & up far above the tree line these tender [lovely] plants climb [go] spreading their bright carpets [&] blooming right cheerily [&] followed by [&] butterflies bees, [follow] up to the edges of the great snowbanks that lay in [the] deep hollows & shadows. The familiar robin was here also & seemed to feel at home bringing to mind the farm in Wisconsin when first I saw him. In such fine company I sauntered [on] enchanted taking no heed of time when at length I entered the gateway of the pass & the huge rocks began to close around me in all their mysterious impressiveness. Just then I was startled by a lot of queer hairy muffled creatures that came towards me in a soft shuffling shambling way as if they had no bones in their bodies. Had I discovered them while they were yet at a good way off I should have tried to avoid them without showing fear. [I was frightened and] felt like running away but of course it [would never do to show fear] What a picture they made contrasted with the others [pictures] [after those of the flowers etc.] I had just been admiring [gazing at] when I came up to them [after] I found they were only a band of Indians from Mono on their way to Yosemite for a load of acorns. They were wrapped in blankets made of the skins of sage rabbits they were all [very] dirty & most of them far from handsome [ugly]. The dirt on some of the faces seemed [places was fairly stratified in appearance and] seemed almost thick enough to [as though it might almost] have

a geological significance & the older faces were strangely blurred & divided into sections by seams or wrinkles that looked like cleavage joints & had a worn abraded look [as if] like boulders that [they] had been lain exposed to the weather for ages. I tried to pass [go rapidly past] them without stopping but they wouldn’t let me, [they’ form[ed] a dismal circle about me I was closely besieged while they begged [& began to beg for] whiskey or [and] tobacco & it was hard to convince them that I hadn’t any [none to give]. How glad I was to get away from the gray grim crowd [when they vanished] down the trail [like mere lumps of dirt] & [how] yet its sad to feel such monstrous [a gulf of] repulsion from [between] ones fellow beings [& me] however degraded. [It] Washed or unwashed must surely be unnatural [wrong to] to prefer the society of squirrels & woodchucks to that of [my] own species [even the slimiest Indians. I] So with a fresh [good] breeze & a hill or mountain between us I wish them Godspeed & fair play & [heartily say] hopefully pray & say [say] with Burns, “it comin’ yet for a’ that that man to man the world over shall brothers be an’ a’ that.”

How the day passed I hardly [don’t] know. When the sun got into the west I had only gone about ten or twelve miles by the map which shows how long I must have [loitered &] lingered observing sketching & taking notes among the glaciated rocks & moraines & [beds] Alpine flower beds [beds of bloom by the way.] When evening came the sombre crags [rocks] & peaks were inspired with the ineffable beauty [loveliness] of the Alpenglow & a solemn awful stillness hushed [fell upon] everything in the landscape. Then I crept into a hollow by the side of a small lake near the head of the canyon, smoothed [away the fallen branches & burrs from] a sheltered spot & cut a few pine tassels for a bed. After the short twilight began to fade, I kindled a sunny fire made a tincupful of tea & lay down to watch the stars. Soon the night wind began to