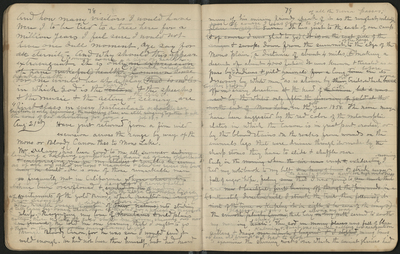 and how many visitors I would have were I to be tied to a tree here for a million years I feel sure I would not have one dull moment, aye say for [all] eternity. & why should this appear extravagant. It is only common sense, a sign of health. General natural all-awake health. [an expression of sane wakeful health. Common sense for] One would be at an endless play. [That is endless] in which God is the star [actor] & the speeches & the music & the acting & the lights & the scenery are ‘first class in every particular’ as showbills say. Creation is only beginning. The morning stars are still singing together & the sons of God shouting for joy. Job 38:7

Aug [August] 21st) Have just returned from a fine wild excursion across the range by way of the Mono or Bloody Canyon Pass to Mono Lake.

Mr. Delaney has been good to me all summer lending a helping sympathizing hand at every opportunity as if [all] my wild notions & rambles & studies were his own. [aiding & encouraging me in my studies & rambles in every way he could.] He is one of those remarkable men [so] frequently met in California [whose characters] who have been over-flowed & denuded & remodeled [eroded by the] grinding excitements of the Gold Period, like the Sierra landscapes by ice which [resulted in bringing] have brought the harder bosses & ridges of character [their natures] into striking relief. A tall lean big boned, big hearted Irishman educated for a priest in Maynooth College, there is lots of good stuff in him, shining out now & then in the [light of this] mountain light. Recognizing my love of [mountains and] wild places [in general] he told me one evening that I ought to go through Bloody Canyon, for he was sure I would find it wild enough. He had not been there himself he said but had heard

many of his mining friends speak of it as the roughest, wildest of all the Sierra passes [pass][place in (all) the Sierra] Of course I was glad to go. It lies just to the east of our camp [and of course I was glad to go. It is on the east side of the range] & swoops down from the summit of the Range to the edge of the Mono Plain, making a descent of about 4,000 feet in a distance of about 4 miles. It was known & traveled as a pass by wild animals & Indians [for a] long [time in] before its discovery by white man in the gold year 1858 as shown by old [their] trails which some [branch off in] come together from every direction at the head of it [the Canyon, but it was used by the whites only after the discovery of gold at the north end of Mono Lake.] The name may have been suggested by the red color of the metamorphic slates in which the canyon is in great part eroded or by the bloodstains on the rocks from wounds on the animals legs that were driven through it made by the sharp stones they have to slide & shuffle over.

Early in the [morning when the air was] crisp [&] exhilarating morning, I tied by notebook to my belt [& a piece of bread] & strode away full of eager hope, feeling [sure] that I was going to have a glorious revel in high wilderness [see much that was new & beautiful, first bearing off through the pine woods in a southeasterly direction until I struck the trail, then following it most of the time or keeping it in sight to be sure of the way]. The smooth glacier meadows [plushy lawns] that lay along my way [in my path] served to sooth my morning speed [haste] for the sod [in many places] was full of blue gentians & daisies, kalmia & dwarf vaccinium calling for recognition as dear old friends & I had to stop [over which I lingered & I stopped] many times to examine the shining rocks over which the ancient glaciers had