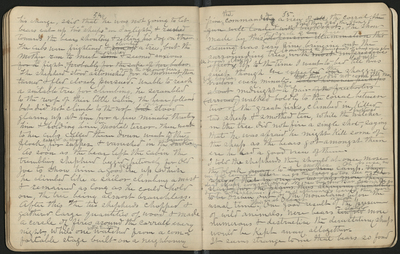 his charge, said that he was not going to let bears eat up his “sheeps in daylight,” & rushed towards the bears shouting & setting his dog on them. The cubs were frightened & climbed [ran up] a tree, but the mother ran to meet the shepherd [him] & seemed anxious [for a] to fight. [probably for the sake of her babes.] The shepherd stood astonished for a moment eying the oncoming bear then turned & fled closely pursued. Unable to reach a suitable tree for climbing, he scrambled to the roof of their little cabin, the bear followed but did not climb to the roof only [but] stood glaring up at him for a few minutes [threatening] him & holding him in mortal terror. Then went to her cubs called them down went to the flock caught a sheep for supper & vanished in the brush [darkness]. As soon as the bear left the cabin the trembling shepherd begged piteously for Old Joe to show him a good safe tree up which he climbed like a sailor climbing a mast & remained as long as he could hold on, the tree being almost branchless. After this the two shepherds chopped & gathered large quantities of wood & made a circle of fires around the corral every night, while one with the gun watched from a comfortable stage built on a neighboring

pine that commanded[ing] a view of [all] the corral. [The gun well loaded with buckshot.] This they did this evening & the show made by the circle of fire [this defensive illumination this evening] was very fine bringing out the surrounding trees & making the thousands of sheep eyes glow like diamonds [with most impressive effect].

Aug [August] 14) Up to the time I went to bed last night all was quiet though we expected the [our] shaggy freebooters [visitors] every minute. [but] They did not come till near midnight [Later however perhaps about] when a pair [of the freebooters arrived] walked boldly to the corral between two of the great fires, climbed in, killed two sheep & smothered ten, while the frightened watcher in the tree did not fire a single shot – saying that he was afraid he might kill some of the sheep as the bears got amongst them ere he had a good view of them.

I told the shepherds they should at once move the flock [away] to another [some new] camp. Oh, No use, no use they lamented. Where we go the bears go too. See my poor dead sheeps, soon all dead. No use try another camp. We go down to the plains. & as I afterwards learned they were driven out of the mountains a month before the usual time. [They replied that in one or two days more they start for the plains thus allowing themselves to be] This is at least one good result of the presence of wild animals. Were bears still [tenfold] more numerous & destructive the devastating sheep would be kept away altogether.

It seems strange to be that bears so fond