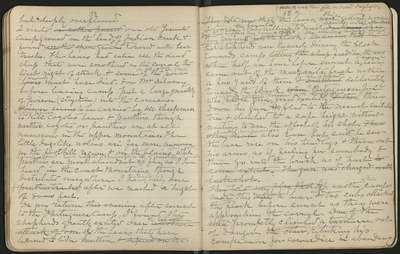 I visited [or rather passed] our old Yosemite Campground on the head of Indian Creek & found [all the open ground] it fairly covered with bear tracks. The bears had eaten all the dead sheep that were smothered in the corral the first night of the attack, & some or all of the grand animals of the poor [bears] must have died. For Mr. Delaney before leaving camp put a large quantity of poison [strychnine] into the carcasses.

[Poison seems to be carried by] All the sheepsmen carry poison to kill coyotes & bears & panthers though neither coyotes or panthers are at all numerous in the upper mountains. The little dog-like wolves are far more numerous in the foothill region & on the plains where small animals abound – hares, rabbits, spermophilus etc. & grasshoppers & fruit, while panthers are most abundant as far as I have heard in the coast mountains, though distributed everywhere. I saw the track of only one [panthers tracks] after we reached a height of 8,000 feet.

On my return [this evening] after sunset to the Portuguese Camp, I found the shepherds greatly excited over the behavior [another attack of one] of the bears that have learned to like mutton. [& depend on it.]

[They told me that] the bears [were] they’re getting worse & worse, they lamented. Not willing to wait [darkness ere] decently until after dark for their suppers they come & kill & [kill &] eat their fill in broad daylight, they venture[d] [into the flock]. The evening before my arrival where the [It seems that the] two shepherds were leisurely driving the flock towards camp [letting the sheep feed by the way when] half an hour before sunset a hungry bear came out of the Manzanita brush within a few yards of them & shuffled [sauntered] deliberately towards the flock. [When] “Portuguese Joe” who always carried [had a] l a gun loaded with buckshot fired excitedly, [and then] threw down his gun [and] fled to the nearest suitable tree & climbed to a safe height without waiting to see the effect of his shot. [The other man] His companion also ran but said he saw the bear rise on his hind legs & throw out his arms as if feeling for somebody & then go into the brush as if hurt [to some extent. The gun was charged with buckshot.

They told me also that] At another of their camps [near] in this neighborhood [once] a bear with [and] two cubs attacked the flock before sunset as they were approaching the corral. [One of the men] Joe promptly climbed a tree [Tamarac] out of danger, while Antone [the other] rebuking his companion for cowardice in abandoning