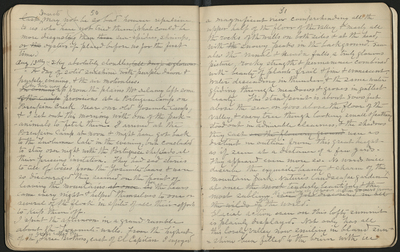 [[last] Insects may not be so bad however repulsive to us who have not tried them (what could be more disgusting than those sea-spiders, shrimps, or [the] oysters if placed before us for the first time.)]

On his way [In coming] up from the plains, Mr. Delaney left some [of the camp] provisions at a Portuguese camp on Porcupine Creek near our old Yosemite Camp, & I set out this morning with one of the pack animals to fetch them. [I] Arrived at the Porcupine Camp at noon & might have got back to the Tuolumne late in the evening, but concluded to stay over night with the Portuguese shepherds at their pressing invitation. They had sad stories to tell of losses from the Yosemite bears & were so discouraged they seemed on the point of leaving the mountains [at once. As] for the bears came every night & helped themselves to one or several of the flock in spite of all their efforts to keep them off.

I spent the afternoon in a grand ramble about the Yosemite walls. From the highest of the rocks called the Three Brothers, east of El Capitan I enjoyed

a magnificent view comprehending all the upper half of the floor of the Valley & nearly all the rocks of the walls on both sides & at the head, with [the] snowy peaks in the background. Saw also the Vernal & Nevada falls, a truly glorious picture, rocky strength & permanence combined with beauty of plants frail & fine & evanescent. Water descending in thunder & the same water gliding through meadows & groves in gentlest beauty. This standpoint is about 8,000 feet above the sea, or 4,000 above the floor of the Valley & every tree though looking small & feathery stood out in admirable clearness, & the shadows they cast [on the flowery ground] were as distinct in outline from this great height as if seen at a distance of a few yards. They appeared even more so. No words will describe the exquisite beauty & charm of this mountain park. Nature’s landscape garden X at once [the most] tenderly beautiful & [the most] sublime. No wonder it draws Nature Lovers from all the world. [ever yet discovered in all the wilds of]

Glacial action even on this lofty summit is plainly displayed. Not only has all this lovely valley now smiling in bland sunshine been filled to the brim with ice