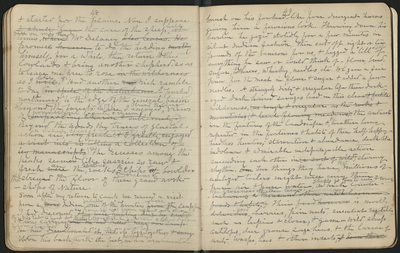 & started for the plains. Now I suppose [I shall have] the care of the sheep will at times fall on me though [when] Mr. Delaney [also leaves. He] promises [however] to do the herding [mostly] himself for a while, then return to the lowlands & bring another shepherd so as to leave me free to rove [in the wilderness] as I like [will]. ¶ Had another [ri…] rich ramble today [in spite of the disturbance] I pushed northward to the edge of the general basin beyond the forests where I enjoyed broad telling views of wonderful beauty & charm [surpassing charm & sublimity]. Beyond the woods the traces of glacial action are strikingly clear & interesting [very fresh & I greatly enjoyed a visit into so telling a collection of icy manuscripts]. The recesses among the peaks seem[ed] like quarries so raw & fresh are [were] the scattered rocks & moraines the chips & [of] boulders that strew[ed] the floor of these grand workshops of Nature.

Soon after my return to camp we received a visit from an [Mono] Indian probably one of the hunters whose [from the] campfire I had discovered. He came he said from Mono with other of his tribe to hunt deer [They were hunting deer he said] & was carrying on his back one that he had killed a short distance from here [He had disemboweled it ] [tied] its legs tied together with the feet projecting in an ornamental [& swung it]

bunch on his forehead like four divergent horns giving him a ferocious look. Throwing down his burden he gazed stolidly for a few minutes in silent Indian fashion, then cut off eight or ten pounds of the venison for us & begged a “lill” (little) of everything he saw or could think of - flour, bread, sugar, tobacco, whiskey, needles, etc. We gave a fair price for the meat in flour & sugar & added a few needles. A strangely dirty & irregular life these dark eyed dark haired savages lead in this clean [& ferile] wilderness, [as rough & irregular as the rocks & mountains & level flowery meadows] the contrasts in the features of the landscape & the weather being repeated in the fortunes & habits of these half happy heedless hunters; starvation & abundance, death-like indolence & admirable indefatigable action succeeding each other in [a sort of wild] stormy rhythm. [One] Two things they have that millions of civilized toilers might well envy them- pure air & pure water. These go far to cure & cover the grossness of their lives. [which counter-balances a thousand other unwholesome foods & habits.] Their food [however] is mostly good [delicious] – berries, pine nuts succulent vegetables such as lupines & clover, & game – wild sheep, antelope, deer, grouse, sage hens & the larvae of ants, wasps, bees & other insect [& even these]