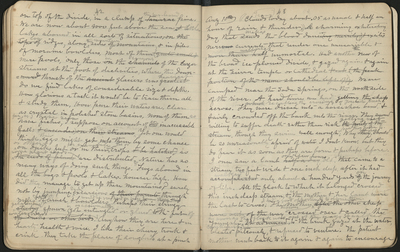 on top of the divide, in a clump of the two leaved [Tamarac] pine. We are now about 9,000 feet above the sea. [&] Little lakes abound in all sorts of situations, on [the tops of] low ridges, along the mountain sides [of mountains], & in piles of moraine boulders, most of them [quite small] mere pools, only those in [on] the [channels] canyons of the larger streams at the foot of declivities, where the down[ward] thrust of the [ancient] glaciers was heaviest [greatest] do we find lakes of considerable size & depth. How glorious a task it would be to trace them all & study them. How pure their waters are. Clear as crystal in polished stone basins, none of them so far as I have seen have fishes, I suppose on account of [the] inaccessible falls [& cascades on their streams] [erasures] yet one would think their eggs might get into them by some chance or other on ducks feet for example or in their mouth's or crops [& be hatched,] as some plant seeds [the seeds of plants] are distributed. Nature has so many ways of doing such things.

Frogs abound & all the bogs & pools & lakes, however high. How did they manage to get up these mountains? Surely not by jumping. Such excursions [of their parents] through miles of dry brush & boulders would be very hard on frogs however strong. [their] Perhaps their gelatinous [sticky] spawn is occasionally got entangled or glued [to] on the feet of water birds [of ducks or other birds]. Anyhow they are here & in hearty health & voice. I like the cheery [trouk/trunk] & crink. They take the place of songbirds at a pinch

Aug [August] 10th) Trans ((Clouds today about 0.05 as usual & half an hour of rain & thunder)) A charming exhilarating day that [sends] makes the blood dance[ing merrily] & excites nerves [nervous] currents that render one unweariable & wellnigh [more than half] immortal. Had another view of the broad ice plowed divide, & gazed again & again at the Sierra temple or Cathedral [Peak. The Peak portion of the name should be left off]. We are camped near the Soda Springs, on the north side of the river. A hard time we had getting the sheep across. They were driven into a horseshoe bend [which] recalling the crossing of Yosemite Creek & fairly crowded off the bank into the river. They seemed willing to suffer death rather than risk getting wet [the perils of the stream], though they swim well enough when I have to. Why [they] sheep should be so unreasonably afraid of water I don't know, but they do fear it as soon as they are born & perhaps before. I once saw a lamb only a few hours old [half a day] that came to a stream 2 feet wide & 1 inch deep after it had walked [accomplished] only about 100 yards [of] on the journey of life. All the flock to which it belonged crossed this inch deep stream, & as the mother & her lamb [were] [erasure] the last to cross I had a good opportunity to observe them. The anxious mother [after the other sheep were out of the way] crossed over & called the youngster as soon as the flock was out of the way. It walked [It advanced] to the brink, gazed at the water, continuously bleated piteously, & refused to venture. The patient mother went back to it again & again to encourage