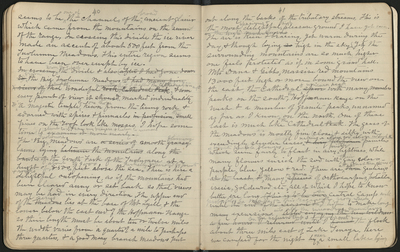 seems to be one of the channels of the broad ancient glacier which come from the mountains on the summit of the range. In crossing this divide the ice river made an ascent of about 500 feet from the Tuolumne Meadows. This entire region seems to have been over-swept by ice.

[In crossing] From the top of the divide & also [after I had gone down to] from the Big Tuolumne Meadows [I had many fine views of that] The wonderful mountain that I called the Cathedral is in sight. [rock cathedral peak]. From every point of you is shows [showed] marked individuality. It is a majestic temple of one stone hewn from the living rock in adorned with spires in pinnacles [in profusion]. The small pines on the roof look like mosses. I hope [to climb to] some time & climb to it to say my prayers & listen to sermons [examine it more nearly].

The “Big Tuolumne Meadows” are [a series of] smooth flowery [grassy] lawns lying [between the mountains] along [the banks of the] South Fork of the Tuolumne at a height of about 8,500 to 9,000 feet above the sea partially separated by forest & rocks. There is here a delightful outopening, as if the mountains had been cleared away or set back so that views may be had in every direction. The upper end of the series [meadows] lies at the base of Mt. Lyell, & the lower, below the east end of the Hoffmann Range so there are length must be about 10 or 12 miles. The width varies from a quarter of a mile to perhaps 3/4, & a good many branch meadows put

out along the banks of the tributary streams. This is the most spacious & delightful high pleasure ground I have yet to seen [in the high mountains]. The air is keen & bracing, yet warm during the day, & though lying [so] high in the sky (yet) the surrounding mountains are so much higher one feels protected as if in some grand hall. Mt.s Dana & Gibbs, massive red mountains 13,000 feet high or more bound the view on the east, the Cathedral & Unicorn peaks [spur] with many nameless peaks on the south, the Hoffmann Range on the West & a number of granite peaks, unnamed as far as I know, on the north. One of these last is much like the Cathedral [Peak]. The grass of the meadows is mostly fine (close) & silky with exceedingly splendor leaves making a close sod above which the [& airy filiform] [parvicles] of minute purple flowers [which] seemed very fairly to float in airy misty lightness. While many flowers enrich the sod with their gay colors - purple, blue yellow & red. There are at least three species of gentian [at the least and] as many or more [species] of orthocarpus, potentilla invisa, goldenrod etc., all of which I hope to know better ere long. [This is to be our] A central camp will probably be made in this region from which [until the end of the season and] I hope to make a long [many] excursions into all the surrounding mountains. [After enjoying the new wilderness a few hours I returned until] On the return trip I met [found] the flock about three miles east of Lake Tenaya. Here we count for the night [by] near a small lake lying