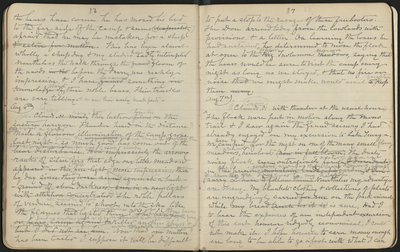 the bears have come he has moved his bed to the far side of the camp & seems [desperately] afraid that he may be mistaken for a sheep [and eaten for mutton]. This has been almost wholly a sheep day & my studies have been sadly interrupted. Nevertheless the walk through the [grand] gloom of the woods [in the] before the dawn was richly impressive, & I have learned [gained] something [in knowledge of] about these noble bears. Their tracks are very telling & so are their [early] breakfasts.

Trans ((No clouds. [.01 merely] save a few thin lustrous touches [films] on the eastern horizon. Thunder heard in the distance)) We enjoyed a grand [Made a glorious] illumination of the camp grove last from the [magnificent] fire we made to frighten bears - fine compensation for loss of sleep & sheep night. So much good has come out of the [bear disturbance how impressively the arrow he ranks of silver first that edge a little meadow appeared in this new fire light more impressive than by day since they were seeing against a black background of Evan darkness. Seen in a new light with attention concentrated.] The noble pillars of verdure all vividly aglow seemed to shoot into the sky like the flames that lighted them. Nevertheless, one of the bears paid us another visit as if more attracted than repelled by the fire. [The bears or bears came again and] Killed another sheep & climbed into the corral [but I did not see him.] made off with it without being seen. Now that our mutton has been tasted I suppose it will be difficult

to put a stop to the ravages of these freebooters. The Don arrived today from the lowlands with provisions & a letter. On learning the losses he had sustained, he determined to move the flock at once to the upper[Big] Tuolumne region [Meadows], saying that the bears would be sure to visit the camp every night as long as we stayed, & that no fire or noise [that] we might make wood avail to frighten [keep] them [away].

Trans ((Clouds 0.1.01 with thunder at the usual hour)) X The flock were put in motion along the Mono Trail & I saw again some of the grand scenery I had already enjoyed on my excursion to Lake Tenaya. We have camped for the night on one of the many small flowery meadows common hereabouts [now in full bloom]. The dusty noisy flock seems outrageously & out of place outrageously foreign & out of place [and discordant] in these [this] precious gardens, more so than bears among sheep. [mountain landscape gardens & I'm sorry I have to follow them] The harm they are doing goes to my heart. Nevertheless, my advantages are many. My blankets, clothing & collections of plants are ungrudgingly carried [for me] on the pack animals while [my] bread [such as it is] is sure. Had I to bear the expenses of an independent excursion of this sort however rigidly economical I could not make it. I hope however to earn money enough ere long to be able to go afoot with what I can