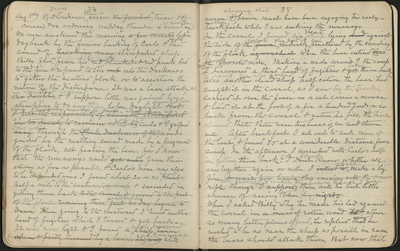 Aug [August] 5) Trans Of cloudiness there is scarce [the faintest] a trace & (of course) our ordinary midday thunder is of course awanting.)) We were awakened this morning [a few minutes] before daybreak by the furious barking of Carlo & [jack] the sound of [breaking away] stampeded sheep. Billy fled from his [red blanket and] red punk bed to the fire & refused to stir [out] into the darkness to try to gather the scattered flock, or to ascertain the nature of the disturbance. It was a bear attack as we afterward learned [no doubt] & I suppose little was gained by attempting to do anything before daylight. Nevertheless being [too keenly] anxious to know what was up [but I felt the responsibility of seeing the flock cared for to keenly to remain idle so] Carlo & I groped our way [away] through the [thick darkness of the] woods guided by the rustling sound made by a fragment of the flock, not fearing the bear, for a new that the runaways would [get away] go from their enemy as far as possible & Carlo’s nose was also to be depended on. I found about 20 or 30 sheep [about] half a mile or so to the eastward [of camp] & succeeded in getting them back [to the corral & joined to the part of the flock remaining there [a little be] just day began dawn.] Then going to the westward I heard another band a fugitives which I traced & got back. It was now light & I found a partly devoured [torn] carcass [open & partly devoured by a bear. It was] still

warm [&] showing that Bruin must have been enjoying this early mutton breakfast while I was seeking the runaways.

In the corral I found six dead sheep lying [dead] against the side of the corral [fence]. They had evidently been smothered by the crowding of the flock [against it] when the bear entered [on the opposite side]. Making a wide circuit of camp Carlo & I discovered a third band of fugitives & drove them back [got] them to camp we also found [also] another dead sheep half eaten. The bear had caught it in the corral, as I saw by the tracks, carried it over the fence as a cat carries a mouse & laid it at the foot of a fir 100 yards or so back from the corral & eaten his fill, the tracks showed that there are two bears if we read them well. After breakfast I set out to seek more of the lost, & found 75 at a considerable distance from camp. In the afternoon I succeeded with Carlo’s help in getting them back to the flock. I don't know whether all are together again or not. I shall [intend to] make a big fire [and wait for bruin this evening with the Don’s rifle though I suppose] this evening & watch the bears though I fear there will be but little chance of seeing them. [by night.]

When I asked Billy why he made his bed against the corral in [a mass of] rotten wood when so many better places offered, he replied that he wished to be as near the sheep as possible in case [the] bears should attack them, but now that