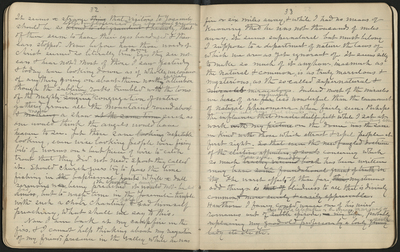 It seems [a] strange [thing] that visitors to Yosemite should be some little influenced by its novel grandeur [blind to its grandeur & beauty]. Most of them seem to have their eyes bandaged & her ears are stopped. Never before have those words of Christ seems so literally true “having eyes they see not, ears & they hear not”. Most of those I saw yesterday & today were looking down as if wholly holy unconscious of anything going on about them worth[y] special attention through the sublime rocks tumbled with the tones of the mighty chanting [singing] congregation of waters gathered from all the mountains round about & made [making] a show [at the same time] such as one would think that the angels would have would leave Heaven to see. Yet those sane [looking] respectable looking, even wise looking people were fixing bits of worms on a bent piece of wire to catch trout that they did not need. Sport they called it. Should churchgoers try to pass the time fishing in [the] baptismal fonts while [a] dull sermons are [were] being preached. The sport it might [would] not be so bad [amiss], but to waste time in the Yosemite temple with such a choir of chanting falls & God himself preaching, what shall we say to this.

Now I am back at my campfire in the firs, & I cannot help thinking about my recognition of my friend’s presence in the valley while he was

five or six miles away do I have no means of knowing that he was not thousands of miles away. It seems supernatural but must belong, I suppose, to a department of nature the laws of which we are as yet ignorant of. It seems silly to make so much of it anyhow. Inasmuch as the natural & common is as truly marvelous & mysterious as the so-called supernatural [and miracles] miraculous. Indeed most of the miracles we hear of are infinitely [far] less wonderful than the commonest natural phenomena when fairly seen. Perhaps the invisible soul rays that struck me [influence that made itself felt] while I sat at work [with my picture] on the dome are something like [was the same in kind with] those which attract & repel people at first sight. [So that even this newfangled the doctrine of the elective [affinities] of souls] concerning which so much [nonsense] [trashy vicious] [muddy] [bosh] has been written [many have some foundational grains of truth in it]. The worst effect[s] of these far, [thin], mysterious odd things is [that of] blindness to all that is divinely common. [& more surely & easily appreciable.] Hawthorne I fancy could weave one of his weird romances out of this little telepathic strange marvel of [subtle] episode [in my life] probably [replacing my good old professor by lovely young lady girletc. etc. etc.]