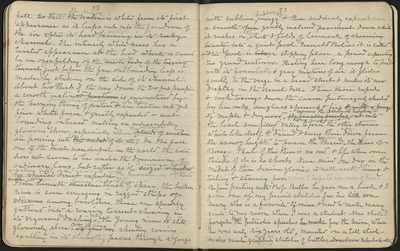 [fall so that the water] The Nevada is white from its first appearance as it leaps out into the freedom of the air [after it's hard braining [travels] & its rocky channel.] The intensely white mass has a twisted appearance at the head [which is] caused by an overfolding of the current [main body of the tossing torrent] by striking on the side of its channel just before the free outbounding leap is made. About 2/3 of the way down the 700 foot precipice a smooth incline[d portion] is encountered by the hurrying throng of comet shaped masses [waters] on which they are beaten into yet finer whiter foam & greatly expanded & sent bounding outward making an indescribably glorious show, especially when the afternoon [floods of] sunshine is [are] pouring into it [the midst of it all]. In this fall one of the most wonderful in the world, the water does not seem to be under the dominion of ordinary laws, but rather as if it were a living [seized & hastened by special direct impulse] creature full of the strength of the mountains & huge wild with joy. From beneath heavy throbbing [massive] blasts of spray, the broken river is seen emerging in ragged strips [of streams] among boulders, these are speedily gathered into a roaring torrent showing in its vigorous on-dashings that the young river is still gloriously alive. On it goes [it goes on] shouting roaring exulting in its strength, passes through the gorge

with a sublime display of energy & then suddenly expands on a smooth open gently inclined pavement down which it rushes in thin sheets & folds of lacework [of charming beauty] into a quiet pool. “Emerald Pool” as it is called [This pool is like] a stopping place, a period separating two grand sentences. Resting here long enough to part with its foambells & gray mixtures of air it glides quietly to the verge on a broad sheet & makes its new display in the Vernal Fall. Then more rapids & rock tossings down the canyon picturesquely shaded by live oaks, Douglas spruce[s] & firs [with a fringe of] Maple & Dogwood & a long sweep & receives the Illilouette tributary [and it finally sweeps] out into the level sunfilled Valley to join the other streams which like itself [and] have danced & sang their way down from the snowy Heights to form the main Merced. The river of mercy. But of this there is no end & life when one thinks of it is so short. Never mind one day in the midst of these divine glories is well worth living & toiling & starving for. While I hope to see more of them. Before parting with Professor Butler he gave me a book & I gave him one of my pencil sketches for his little son Henry who is a favorite of mine, & used to make many visits to my room when I was a student. Never shall I forget his [the] patriotic speeches he made for the Union, when he was only six years old. Mounted on a tall stool. [He also made graphic] nor his sketches of battles, [Donelson Shiloh etc.]