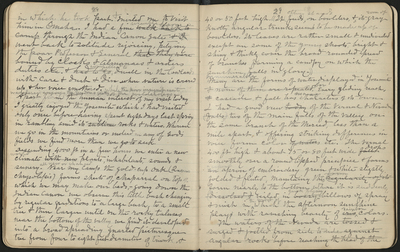 in which he took part & invited me to visit him in Omaha. I had a fine scramble home [walk back to camp] through the Indian Canyon Gate [& I] went back to solitude rejoicing, pitying the poor Professor & General [that they were] bound by clocks & Almanacs & orders duties etc. & compelled to [had to go] dwell in the lowlands with care & dust & din where Nature is covered up & her voice smothered. While the prior insignificant wanderer enjoys the freedom & glory of the wilderness. Apart from the human interest of my visit today I greatly enjoyed the Yosemite which I had visited only once before having spent eight days last spring & rambling amid its [sublime] rocks & waters. Wherever we go in the mountains or indeed in any of God’s fields we find more than we [go to] seek.

Descending 4000 feet in a few hours we end to a new world climate [with new] plants, inhabitants, sounds & scenery, all new or changed. Near my camp the gold-cup Oak (Quercus chrysolepis) forms sheets of chaparral on top of which we may make our beds, -going down the Indian Canyon we observe this little bush changing by regular gradations to a large bush, to a small tree & then larger until on the rocky taluses near the bottom of the valley we find it developed into a broad spreading gnarled picturesque tree from 4 to 8 feet diameter of trunk &

40 or 50 feet high. (( It (feeds) often stands on boulders & some of its gray knotty angular trunks seem to be made up of boulders. Its leaves are rather small & undivided except on some of the young shoots, bright & shiny & thickly cover the broad rounded spread of branches forming a canopy on which the sunshine falls in glory.))

Innumerable [many] are the forms of water displayed in Yosemite [& none of them are repeated] for every gliding reach [&] cascade & fall has [many] characters of its own. I had a good view [today] of the Vernal & Nevada [falls] two of the main falls of the valley on the same branch of the Merced, less than a mile apart & offering striking differences in voice form color [of waters] etc. The Vernal 400 foot high & about 75 or so feet wide drops [falls] smoothly over a round lipped precipice & forms a superb [an] apron of embroidery green & white slightly folded & fluted, maintaining this [form] [regularly of its] form nearly to the bottom where it is suddenly [dissolved and] veiled in quick flying [bossy] billows of spray & mist in the midst of which in the afternoon sunshine plays with ravishing beauty of rainbow [iris] colors.