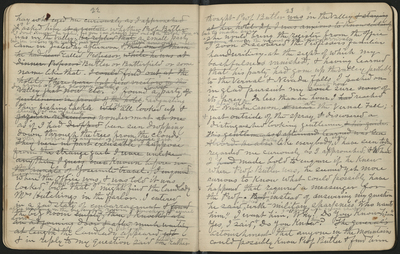 hay [who eyed me curiously as I approached] & [I] asked him [at a venture] whether Professor Butler was in the valley. “I don't know,” he replied, “but you can easily find out at the hotel; there are but few visitors in the valley just now, a small party came in yesterday afternoon, I heard someone [that one of them he heard] called Professor [while he was at dinner professor] Butler or Butterfield or some name like that.” [I could find out at the hotel. There were but few visitors in the valley just now etc.] In front of the gloomy hotel I found a tourist party [of gentleman in front of the hotel] adjusting their fishing tackle who [they] all looked up & stared at me in silent [glazed in ridiculous] wonderment [at me] as if I had [dropped] been seen dropping down through the trees from the clouds, mostly I suppose on account of my strange garb. [They were in part excusable I suppose from the strange garb I wore, unlike anything I guess [ever] known before in the annals of Yosemite travel. I enquired] Enquiring where the office was & was told it was locked & the landlord away but that I might find the landlady, Mrs. Hutchings, in the parlor. I entered in a sad state of embarrassment & [found] after waiting in the big empty room & knocking at several doors, the big room [empty then I knocked an adjoining door & after much waiting at length] the landlady at length appeared; [wh] & in reply to my question said that she [the] rather

thought Prof [Professor] Butler was in the valley [and staying at her hotel. If I was anxious to know certainly] but to make sure she would bring the register from the office [to know] Among the names of the last arrivals I soon discovered the Professor’s familiar hand writing at the site of which my bashfulness vanished, & having learned that his party had gone up to the Valley, probably to the Vernal & Nevada Falls, I pushed on in glad pursued my heart now [soul] sure [now] of its prey. In less than an hour I [had] reached the head of the Nevada Canyon, [and near] at the Vernal Fall, & just outside of the spray [I] discovered a distinguished looking gentleman [& his guide. This gentleman as I afterward learned was general Alvord. He also] who like everybody else I have seen today regarding me curiously as I approached. [&] When I [had] made bold to enquire if he knew where Professor Butler was, he seemed yet more curious to know what could possibly have happened that required a messenger for the Professor [but] & instead of answering my question he [said] asked with military sharpness, “Who wants him.” “I want him,” I replied with equal sharpness. “Why! Do you know him” “Yes,” I said, “and do you know him?” [The generals] Astonishment that anyone in the mountains could possibly know Prof [Professor] Butler & find him