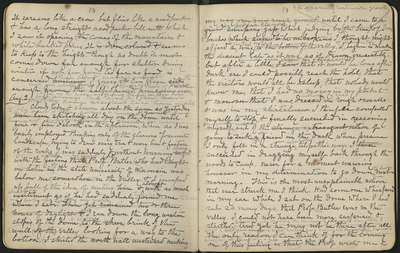 It screams like a crow but flies like a woodpecker & has long straight woodpecker bill with which I saw opening [the] cones of the Mountain & White barked Pines. It [is dove colored &] seems to keep to the heights. Though no doubt it [must] comes down far enough for shelter during winter if not for food. So [as] far as food is concerned [however] these bird mountaineers I guess [it] can glean nuts [seeds] even in winter from the different kinds of pines [in winter] enough as in the case of young birds in their nests [from the half opened pinecones even] for always there are a few seeds that by some accident have been unable to fly out of the cones & remain for hungry [birds & squirrels] gleaners in winter.

Aug [August] 2) Clouds [today] & shower about the same as yesterday. [Have been] Sketched[ing] all day on the north Yosemite dome until four or 5 o'clock in the afternoon, when as I was busily employed thinking only of the glorious Yosemite landscape, trying to draw every true tree & every line & feature of the rocks I was suddenly & without warning stung [seized] with the [feeling] notion that my friend Professor JD Butler [who had taught me Latin in] of the State University of Wisconsin was below me [somewhere] in the Valley, & I jumped up full of the idea of meeting him & almost with as much startling excitement as if he had suddenly touched [joined] me to make me look up. Leaving my work [where I sat. There yet remained two or three hours of daylight and] I ran down the long western slope[s] of the Dome & along [to] the [sheer] brink of the wall [of the] valley looking for a way to the bottom. [I skirted the north wall westward making]

[my way over very rough ground] until I came to a side [Indian] Canyon [grand sweeping gap] which judging by its apparently continuous growth [the line] of trees & bushes [which seemed to be unbroken] I thought might afford a practical way into [the bottom of] the valley & [I] immediately began to make the descent late as it was as if drawn irresistibly. But after a little common sense stopped me & explained [I saw] that it would be long after dark ere I could possibly reach the hotel, that the visitors would [all] be asleep, that nobody would know me, that I had no money in my pocket & moreover [that I] was [dressed in rough overalls] without a coat [and was in my shirtsleeves]. I therefore compelled myself to stop & finally succeeded in reasoning [thus fairly reasoned] myself out of the [strange extravagant] notion of [going to seek] seeking [a] my friend in the dark, whose presence I only felt in a strange nebulous telepathic way. I [then] succeeded in dragged[ing] myself back through the woods to camp, never for a moment wavering however in my determination to go down to him the next morning. This is the most unexplainable notion that ever struck me I think. Had someone whispered in my ear while I sat on the dome, where I had sat so many days, that professor Butler was in the valley I could not have been more surprised & startled. When I was leaving the University he said, “Now John I want to hold you [always] in sight & watch your career all the way through life. Promise to write me at least once a year” [And yet he may not be there after all. The only reason I can think of for the coming on of this feeling is that] The Professor wrote me a