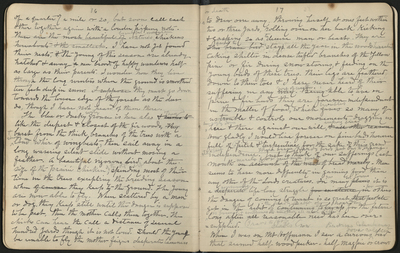 of a quarter of a mile or so, but soon call each other together again with a louder piping note. [These are the most beautiful of] Nature’s beautiful mountain chickens [hereabouts & the smallest]. I have not yet found their nests. [&] The young of the season are already hatched & away, [a] new brood of happy wanderers as large as their parents. I wonder how they live through the long winters when the ground is smothered ten feet deep in snow. [I suppose] They must go down towards the lower edge of the forest as the deer do, though I have not heard of them there.

The blue or dusty sooty grouse is here also & they [seems to] like the deepest & closest [of the] fir woods, [They] & burst from the thick branches of the trees with a strong loud whir [of wing beats], then sail away in a long wavering silent slide without moving a feather. A beautiful vigorous bird about the size of the prairie chicken of the Old West, spending most of their time in the trees excepting the breeding season when [of course] they keep to the ground. The young are now able to fly. When scattered by a man or a dog, they keep still until the danger is supposed to be past, then the mother calls them together. The chicks can hear the call a distance of several hundred yards though it is not loud. Should the young be unable to fly the mother feigns desperate lameness

or death to draw one away, throwing herself at once feet within two or three yards, rolling over on her back kicking & gasping so as to deceive man or beast. They are said to [this brave bird] stay[s] all the year in the woods hereabouts taking hardy well clad shelter in dense tufted branches of the yellow pine or fir during snowstorms, & feeding on the young buds of these trees. Their legs are feathered down to their toes & I have never heard of their suffering in any sort of weather [way]. [Being] Able to live on pine & fir buds they are forever independent in the matter of food, which troubles [gives] so many of us [trouble] & controls our movements dragging us hungrily down here & they're against our will seeking bread [& all other reason]. How gladly I would live forever on pine buds however full of turpentine & pitch for the sake of this grand steadfast Independence. These brave hardy birds put us to shame. Just to think of our sufferings last month merely for grist mill flour [on account of the want of bread merely]. Man seems to have more difficulty in gaining food than any of the Lord’s creatures. In [for] many in town's [places] it is a consuming [desperate] lifelong struggle [for existence, in] for others the danger of coming to want is so great [that people] get in the habit the deadly habit of hoarding of [continuing to lay up] for the future is formed & continues to smother all real life long after [all] reasonable need has been over supplied. trans to Hof [Hoffman] Clark’s Crow

When I was on Mount Hoffmann I saw a curious dove colored bird Picicorvus Columbianus that seemed half woodpecker, half magpie or crow