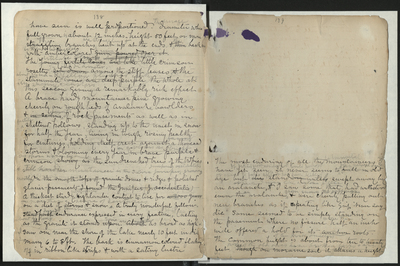 have seen is well proportioned. The average diameter when full grown is about 12 inches, height 50 feet or more. The [straggling] branches are straggling & bent up at the ends. The [& thin] bark is thin & bedraggled with amber colored resin [gum poured over it]. The pistillate flowers [young fertile cones are like] [when young] form little crimson rosettes ¼ inch diameter about 3/8 inch in dia [diameter] [set down] among the stiff leaves [and] the staminate [cones are deep] yellow flowers with purple [the whole] at this season giving a remarkably rich effect. A brave hardy mountaineer pine growing cheerily on rough beds of avalanche boulders & [in seams] joints of rock-pavements as well as in the fertile sheltered hollows, standing up to the waist in snow for half the year, living through [rosiny] health for centuries, [holding itself erect against] facing a thousand storms & blooming every year in colors as bright as those worn by [in brave purple & crimson showy as] the sundrenched trees of the tropics still hardier mountaineer is the Sierra Juniper (Juniperis occidentalis) growing mostly on [the smooth tops of granite] domes & ridges & polished glacier-pavements [I found Juniper (J. occidentalis) a thickset sturdy picturesque highlander content to live for [a 1000 years of] more than a score of centuries, on a diet of sunshine [storms] & snow. A truly wonderful fellow. [steadfast] Dogged endurance expressed in every feature, lasting about as long as the granite it stands [upon] Some are nearly [about] as broad as high. I saw one near the shore of the lake nearly 10 feet in di[ammeter] [fold in paper] & many 6 to 8 feet. The bark is cinnamon colored flaking off in ribbon like strips [and] with a satiny luster.

The most enduring of all the mountaineers I have yet seen. If protected from accidents it would perhaps be immortal. It never seems to die a natural death or even fall after it has been killed [to fall in old age] but [dies] stands[ing] until [unless] swept away by an avalanche or weathered away like a stone pillar. [and] I saw some that had withstood [even the] an avalanche from snowy Mt Hoffmann & were cheerily putting out new branches as if repeating like Grip “Never say die”. Some seemed to be simply standing on the pavement where no fissure more than half an inch wide offered a hold for it’s [anchor] roots. The common height of these rock dwellers is about from ten to twenty feet. Most of the old ones have broken tops & are [though on moraine soil attains a height]