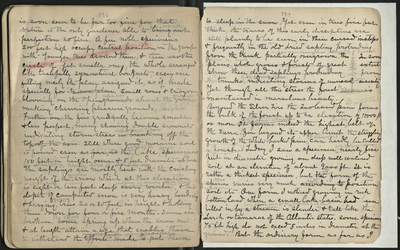 [is soon seen to be far too fine for that.] Nature is the only gardener able to do work [bring out perfection] so fine. A few noble specimens 200 feet high occupy central position in the groups with younger trees around them, & then another circle of yet smaller ones, the whole arranged like tastefully symmetrical bouquets, every one fitting nicely the place assigned it, as if made specially for it[s own place]. Small roses & eriogonum are glooming on the open spaces [grounds] about the groves [groups] making charming pleasure ground. Higher [Farther on] the firs gradually become smaller & less perfect, many showing double summits indicating storm stress[& broken tops][in breaking off the top of the axis]. Still where good moraine soil is found even [as far as] on the rim of the lake basin specimens 150 feet in height occur & five feet diameter [at the base] at [a height of] nearly 9000 feet [above the sea] the saplings are mostly bent with the crushing weight of the winter snow which at this elevation must be at least [is] eight or ten feet deep judging by marks on the trees [every winter], & this depth of compacted snow is very heavy bending & burying young trees 20 or 30 feet in height & holding them down for four or five months. Some are broken, the others [some] spring up when the snow melts & at length attain a size that enables them to withstand the [weight of the] snow pressure [efforts made to put them]

[to sleep in the snow]. Yet even in trees five feet thick, the traces of this early discipline are still plainly to be seen in the curved insteps & frequently in [the] an old dried sapling protruding from the trunk partially overgrown thus a new axis having been formed by branch below the break [illustration of a fir with a branch/axis extending from the trunk. labeled (P. Contorta)] [In some places whole groves & forests of great extend show these dead saplings protruding from the trunks of the living trees] indicating storms of unusual severity. Yet through all this stress the forest is maintained in marvelous beauty. Beyond the silver first the Two-leaved pine forms the bulk of the forest up to an elevation of 10,000 feet or more [Trans ahead] It forms indeed the highest timber belt of the Sierra. For beyond its upper limit the straggling growth of the white barked pine (P. Albicaulis) can hardly be called a forest. Today I saw a specimen [of the two-leaved pine] nearly five feet in diameter growing on deep well watered soil at an elevation of about 9000 feet. It is rather [a] thickset [specimen], but its [the] form [of the species][tree] varies very much with [according to] position, exposure, soil, etc. One form I noticed growing in rich bottomland where a small lake-basin had been filled in like those seen at the Yosemite Creek ford [stream] is as slender[& tall like] the Larch or tamarac of the Atlantic states. Some specimens 75 feet high do not exceed 5 inches in diameter at the ground. But the ordinary form as far as I