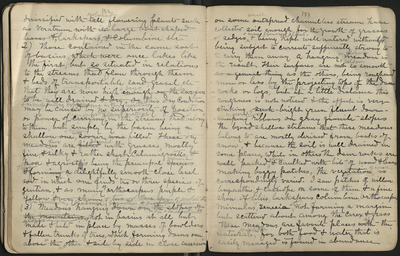 diversified with robust [tall] flowering plants such as Veratrum [with its large boat shaped leaves and] larkspur[s] [and] columbine, etc. 2. Those contained in the same sort of basins [which were] once lakes like the first, but so situated in relations to the streams that flow through them & beds of transportable sand, gravel, etc. that they are now high & dry & [enough on the surface to be] well-drained [& dry. Or] This dry condition & corresponding difference in this vegetation may be caused by no superiority of position or power of transporting filling material [carrying] in the streams that belong to them, but simply by the basin being [a shallow] & therefore [was][one] sooner [was] filled. [These dry meadows] they are planted [filled] with grasses, mostly fine [and] silky & rather short Calamagrostis [and] poa & Agrostis being the principal genera [species]. They [and] form[ing] a delightfully smooth close level sod in which one finds two or three species of gentian, & as many of orthocarpus purple & yellow [& very showy] & two or three species of which violet, etc., vaccinium, kalmia, bryanthus [cassiope] lonicera. 3. Meadows hanging [down] on ridge & mountain slopes [the slopes of the mountains,] not in basins at all but made & held in place by masses of boulders & fallen trunks of trees, which, forming dams one above [the] another & side by side in close succession

on [some] small outspread channel-less stream, have collected soil enough for the growth of grasses, [and] sedges & many flowering plants, & being kept well-watered without being subject to currents sufficiently strong to carry them away a hanging or sloping meadow is the result. Their surfaces are seldom [not] so smooth [as a general thing] as the others, being roughened more or less by the projecting tops of the dam rocks or logs that keep the sod in place but at a little distance this roughness is not noticed & the effect is very striking, [such] bright green fluent down-sweeping mossy flowery ribbons on gray [granite] slopes the broad shallow streams [that] these meadows belong to are mostly derived from banks of snow & because the soil is well drained in some places, while in others the dam rocks are [well] packed close & caulked with bits of wood & leaves making boggy patches, the vegetation of course is correspondingly varied. I saw patches of willow, bryanthus, & cassiope on some of them, & a fine show of lilies, larkspurs, columbine, orthocarpus, mimulus, & senecio, etc. not forming a margin but scattered about among the carex & grass. These meadows are favorite places of [with] the water-rats & hapladon for both food & water that is easily managed is found in abundance.