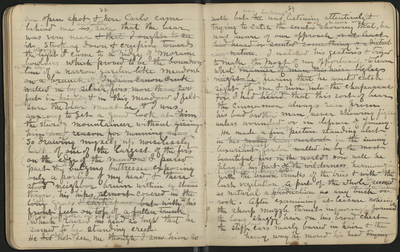 an open spot & here Carlo came behind me evidently [as] sure that the bear was very near [& that I ought to see it]. Stooping down & creeping towards the opening [light] I came to a low ridge of moraine boulders [which proved to be the boundary line] on the edge of a narrow garden [like] meadow [on a branch of Indian Canyon Creek walled in by silver [the tall] firs, more than 200 feet in height] & in this meadow I felt pretty sure the bear must be.[ and] I was anxious to get a good look at [him] the sturdy mountaineer without alarming him [giving any reason for running away] So drawing myself up noiselessly back of one of the largest of the trees [firs on the edge of the meadow] & peered past [the]its bulging buttresses exposing only a portion of my head, & there stood neighbor bruin within a stones throw, his hips [almost] covered by the tall grass [in the long] & flowers [larkspurs but with] his front feet on the trunk [top] of a [fallen trunk] that had fallen out into the meadow which raised his head to high that he seemed to be standing erect. He had [did] not yet seen me [though I saw him so]

[well] but was looking & [he] listening attentively[& trying to catch the scent showing in some way that he was aware of our approach, [ or a least he had heard or scented something of a disturbing nature.] I watched his gesture & tried to make the most of my opportunity to learn what I could about him [manner of man this hairy big legs might be] fearing [that] he would catch sight [or scent] of me & run away [into the chaparral For the Dom [I] had told me [heard] that this sort of bear the cinnamon always ran from his bad brother man, never showing fight unless wounded or in defense of young. He made a telling [fine] picture standing alert [in his roomy hairy overcoat] in the sunny [luxuriant] forest garden [walled in by the most beautiful firs in the world.] How well he played his part [of in the wilderness] harmonizing in bulk & color & shaggy hair with the [brown] trunks of the trees & [with the] lush vegetation [a part of the whole he seemed] as natural a picture [production] as any other in the landscape [bush or rock]. After examining him at leisure noticing the sharp muzzle thrust inquiringly forward the long shaggy hair on his broad chest the stiff erect ears nearly buried in hair & the slow heavy way he moved his head [trying]