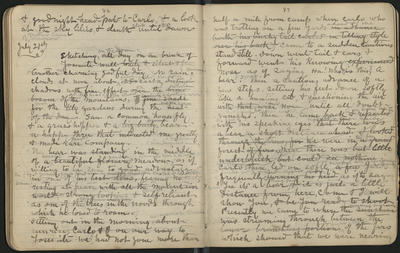 [&] goodnight [head pat] to Carlo, [&] a look at the sky lilies, & death sleep until the dawn of another Sierra tomorrow.

Sketching on the Dome [all day on the brink of Yosemite wall lonely & silent & free. Another all charming Godful day] No rain [today] Clouds at noon quarter filled the sky [.25 casting shadows with fine effect on [over] the white [broad bosom of the] mountains at the head of the streams, & [making] a soothing cover over [fine shade for] the [lily] gardens during the warm hours [heat of the day]. Saw a common housefly, & a grasshopper & a [big burly] brown bear, [a happy three that interested me greatly & made rare good company] The bear stood [was standing] in the middle of a small garden meadow [beautiful flowering] between the dome & the camp, standing alert among the flowers as if willing to be seen to [good] advantage, [in one of his best dens, fearing no evil, resting at peace with all the mountain world as strong looking & careless self-reliant as one of the trees in the woods through which he loved to roam.] & the fly & grasshopper paid me a merry visit on the top of the [North] Dome. [setting out in the morning as usual to sketch about sunrise. Carlo & I on our way to Yosemite dome we] I had not gone more than

Half a mile from camp when Carlo who was trotting on a few yards ahead of me [in advance with his bushy tail curled in telling style over his back] came to a sudden cautious standstill. Down went tail & ears & forward went his Knowing [experienced] nose as if saying “Ha! What’s this? [Who is this] A bear? I guess. Then cautious advance of a few steps, setting his feet down softly like a hunting car, & questioning the air [with that wise his nose] until all doubt vanished as to the scent he had caught. Then he came back to me looked me in the face [& reported] with his speaking eyes reported a bear nearby [that there was a bear a short distance ahead. I looked through the trees for we were in the fir a grand forest of firs where there was but little underbrush but could see nothing. Carlo] then led on softly, careful like an experienced hunter not to make the slightest noise. [a few yards] frequently looking back [turning his head] as if [to] saying to me “Yes it’s a bear [& it is just a little distance from here] Come & I’ll [will] show you [& be you ready to shoot] Presently we came to where the morning sunbeams were [sunshine was] streaming through between the [lower branchless portions] purple shafts of the firs which showed that we were nearing