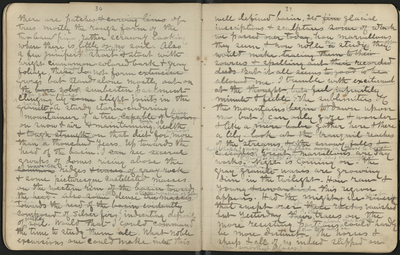 There are patches [& curving lines] of trees mostly the rough form of the two leaved pine, rather scrawny looking where there is little or no soil. Also a few junipers (J. Occidentalis) short & stout with bright cinnamon-colored bark & gray foliage, the[se] juniper does not form [extensive] groves but stand alone mostly out on the [bare solid] sunbeaten pavement safe from fire clinging by [some] slight joints in the rock [granite] a sturdy storm enduring mountaineer tough health [and tough strength] on that dirt for perhaps more than a thousand years. Up towards the head of the basin. I [can] see [several] groups of domes rising above the [common] wave-like ridges [and waves of gray rock] & some picturesque castellated masses [on the western rim of the basic toward the head. Also some] with dense strips & patches of fir [tree masses toward the head of the basin evidently composed of silver firs] indicating deposits of fertile soil. Would that I could command the time to study them [all]. What noble excursions one could make in[to] this

Well defined basin. Its [fine] glacial inscriptions & sculptures [some of which we passed over today] how marvelous they seem, & how noble the [a] studies[y] they offer [would make tracing them to their sources & spelling out their recorded deeds. But it all seems too good to be allowed me.] I tremble with excitement [at the thought, but feel infinitely minute & feeble] the sublimities of the mountains [begin to] dawn upon me, but I can only gaze & wonder like a child [mere babe] gather here & there a lily, [look at the tranquil reaches of the streams & the snowy falls & cascades] half hoping I may be able to study & learn [more] in years to come. Trans to page 34 Night is coming on & here begin sheep crossing pg 40 the gray rock [granite] waves are growing dim in the twilight. How raw & young [and ancient] this region appears. Had the [mighty] ice sheet [rivers that] swept over it [these rocks] vanished but yesterday it’s [their] traces on the more resisting portions about our camp could hardly be more distinct than they now are. The horses & sheep & all of us indeed slipped on the smoothest places