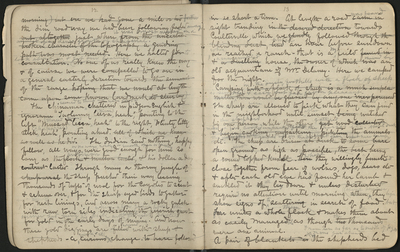 [morning) but ere we had gone a mile or two further] the dim roadway we had been following faded away [out altogether] just where it was most needed in a [account of a] dense growth of chaparral. [from the uncertain broken character of the topography a guiding path was most needed.] Here we halted to [for] look about us and get our bearings [consultation. (No one of us really knew the way

The chinaman seemed to think we were lost & chattered in pidgeon English [& Ignorance] "Tuolumy leeva (river) heah", pointing to the left "Mussad leeva (Merced River) heah" to the right, plenty litty stick (Chapparal) heah", pointing ahead. [All of which we knew as well as he did.] The Indian said nothing, happy fellow, all ways or no ways rocky or smooth, open or bushy were good enough for him so long as the provision [flock & mutton lasted], & his dollar a day [contract] lasted. Through many a thorny jungle [of] [chaparral] the sheep pushed their way leaving thousands of tufts of wool for the coyotes to scent

& scheme over & for the sharp eyed birds to gather for [next spring] nest lining, and across many a rocky gulch with raw torn sides where a few years before the miner had swung his pick with hopeful feverish haste [indicating the feverish quest for gold in the early days of mining.] And now these gold diggings are covered [filled] with sheep [& shepherds] - a quick and strange [curious] change [to have followed]

[in so short a time.] At length a road was found [came in sight] trending [in the desired direction] towards Coulterville, which we [gladly] followed [through the blinding dust], [and] until an hour before sundown when we reached a ranch - that is a dry field [fenced in] & a sun-crinkled [dwelling] house, [the owner of which was] owned by an old acquaintance of Mr Delaney. Here we camped for the night.

Camping in the [dusty] foothills with a flock of sheep is simple and easy but far from pleasant. [with a flock of sheep is a much simpler matter than would be guessed by anyone inexperienced] The sheep were [are] allowed to pick what they could [can] find in the neighborhood until after sunset, [being] watched by the shepherd [one person], while the others gathered [get] wood [collected

& begin cooking, unpacking, picketing the animals etc.] made a fire, cooked, unpacked and fed the horses etc. About dusk the weary sheep were rounded up on the highest open spot near camp [The sheep are driven at dusk to some bare open ground, as high as possible, the best being a round topped knoll.] Where [There] they willingly bunched close together from fear of wolves, dogs, bears etc

& after each old ewe had[s] found her lamb & suckled it all [they lie] lay down & [unless disturbed] require no attention until morning About sunrise [when] they begin [show signs of] to scatter[ing] in search of food. But fear unites them [a whole flock] & makes them about as [easily] manageable[d] as though the [two] thousands were one animal.