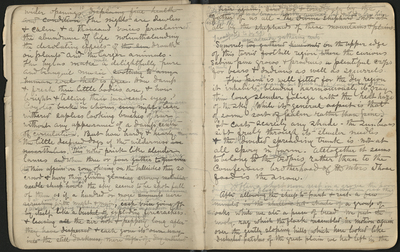 wider openings [displaing [displaying] fine health and condition.] [Trans pg 11 bottom] The nights are dewless & calm & a thousand voices proclaimed [the] abundance of life notwithstanding the desolation effects of [the sun] drouth on plants and the larger animals.

The hylas made [make] a delightfully pure and tranquil music [soothing to any human soul that is free.] How damp & fresh their little bodies are, & how bright & telling their innocent eyes!

Coyotes barked in chorus on the hilltops [every night [They are] – lean withered sapless looking brushes of hair without any appearance of a damp yellow brown or solid centre [of circulation.] But how hardy & hearty [they are] nevertheless [they are] the little despised dogs of the wilderness [are] [nevertheless]. Their [His] notes prick like slender lances [and] when three or four assemble [gather] to sing [to give voice to their affairs] on some opening on the hillsides they so crowd & hurry their prickly, glinting [glancing] arrowy [metallic needle sharp howls] notes that sky seems to be shot full of them as if a hundred or more [shrill metallic voices] [animals] were at work [screeching] with might & main, flashing forth [each voice going off by itself like a bushel of] sharp lancing musical notes in hasty succession like exploding firecrackers

[& leaving all the air hot & peppery long after they have dispersed & each gone its own way into the still darkness, mere tufts of dry withered] [sorely wounded]

But nobody loves the brave hearty singer save the [The coyote is a brave hardy animal] but nobody loves him except the [hair again, cared for & loved only by the] Father of us all – [the Divine Shephard - not at all by the shepherds of these mountains & plains.]

[Squirrels are already gathering nuts too gather pine nuts] On the upper edge of this torrid foothill region, [where] the curious Sabine pine grows & produces [a] plentiful crop Of nuts for bears & Indians as well as squirrels. [This pine] It is well fitted for the dry region it inhabits - requiring but little moisture blending harmoniously its long, [slender] thin gray [thin long slender] foliage with the heat haze of the sky [(While its general aspect is that of some sort of palm rather than pine.)] It casts scarcely any shade - the sunbeams sift freely through its loose slender needles & its [the] divided spreading trunk is not at all spiry in form. Alltogether it seems to belong to the [reg of the] tropics rather than to the

Coniferous brotherhood of the mtns [mountains] whose food is the snow.