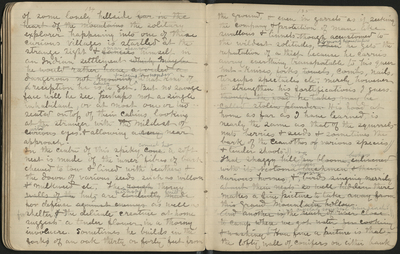 of some lonely hillside [far in the heart of the mountains] the solitary explorer happening into one of these curious villages is startled at the strange sight & may fancy [fancies] himself in an Indian settlement [which maybe he would rather have avoided as dangerous not knowing] and begin[s] to wonder what kind of a reception he is likely to get. But no savage face will he see, perhaps not a single inhabitant or at most one or two seated on top of their cabins looking at the stranger with the mildest of wild [curious] eyes & allowing a [very] near approach.

In the centre of this spiky conical hut [cone] a soft nest is made of the inner fibres of bark chewed to tow & lined with feathers & the down of various seeds such as willow [&] milkweed etc. The [rough] thorny [walls of the] huts are perhaps built [evidently made] for defense [against enemys] as well as for shelter [&] the delicate creature at home suggests a tender flower in a thorny involucre. Sometimes he builds in the forks of an oak thirty or forty feet from

the ground, & even in garrets as if seeking the company & protection of man like swallows & linnets though accustomed to the wildest solitudes, among housekeepers [Then] he gets the reputation of a thief because he carries away everything transportable to his queer hut - Knives, forks, [towels,] combs, nails, tincups spectacles etc, merely however to strengthen his fortifications I guess [though the food he takes may be called stolen plunder]. His food at home as far as I have learned is nearly the same as that of the squirrels - nuts berries & seeds & sometimes the bark of the ceanothus of various species

[That shaggy hill of in bloom [bushes] enlivened with its Neotoma [villages] bushmen & their curious homes & [merry] birds singing merrily about their nests so well hidden there makes a fine picture to take away from this grand mountain hollow.]

*[And another is] the crystal songful river reaches [reach of river close to camp where we got water for cooking & washing. How fine a picture is that -] the lofty wall of conifers on either bank