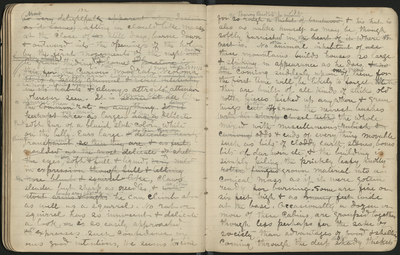 [was] [is very delightfully apparent at a distance as it comes] wafting in cloudlike masses at the close of [a] still day, borne down & outward into the openings of the hollow by the first movements of the night breeze [wind]

Transpose ahead (([A grand] home and the hiding place [& home & pasture is this for] of the curious woodrat (trans back to pg 116) Neotoma and countless merry birds, lizards, [beetles?] butterflies and wonderful spiders a handsome interesting animal [It is a pretty animal & very interesting in its habits &] always attract[s]ing attention wherever seen. It is more like a squirrel than a [scarce at all like the common] rat [in anything.] [being] [It is perhaps twice as] is much larger [having] has [a] delicate thick soft fur of a blueish slate color, white on the belly. Ears large [&][so thin they are] [delicate nearly] thin & translucent[parent],[ so thin they are, & as finely moulded [sic] as the most delicate of shells

The] eyes mild in expression soft [&] full & liquid, [very mild in expression though full & telling [the] nose blunt & squirrel-like,] claws slender but sharp as needles, & as his [with stout arms & thighs] limbs are strong he can climb about as well as a squirrel. No rat or squirrel has so innocent & delicate a look [or] is so easily approached [&] or expresses such confidence in ones good intentions. He seems too fine

for the thorny thickets he inhabits [so rough a thicket of brushwood], & his hut is also as unlike himself as may be, though softly furnished inside [the heart of it where the nest is]. No other animal inhabitant of [all] these mountains builds houses so large & striking in appearance as he does [& no one] the traveler coming suddenly upon [one] a group of them for the first time will not be likely to forget [it] them

They are built of all kinds of sticks, old rotten pieces picked up anywhere & green twigs bitten [cut off] from the nearest bushes [with his sharp chisel teeth], the whole mixed with miscellaneous [rub[b]ish & curious] odds & ends of everything movable such as bits of cloddy earth, stones, bones bits of deer horn etc & the building is simply piling the prickly leafy knotty [rotten fungus] moss grown material into a conical mass as if it were gotten ready for burning. Some are five or six feet high & as [many feet] wide at the base. Occasionally a dozen or more of these cabins are grouped together though less perhaps for the sake of society, than advantages of food & shelter coming through the deep stiff shady thickets