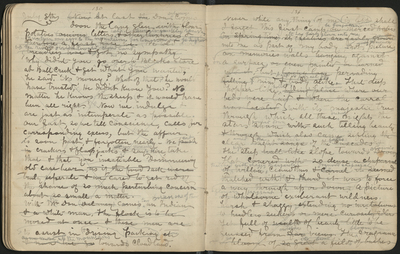 July 8th} [Now] At last the Don Delaney comes doon the lang glen with flour potatoes [onions] letters etc. hunger quickly vanishing [& other luxuries] & we turn out eyes to the mountains for tomorrow we go higher up the river divide toward cloudland. [[therefore a feast have we. We told our breadless woe & got us no sympathy

Why didn't you go over to Blacks store] at Bull Creek & get a sack of flour what you wanted, he said. 'No money? What of that he would have trusted, He didn't know you? No matter he knows the sheep & it would have been all right.' Now we indulge & are just as intemperate as possible.

Our fast, so we tell conscience, calls for corresponding excess, but the affair is soon past, & forgotten nearly. We eat [push] in crackers & flapjacks & say to our stomachs “here, take that & that you insatiable 'domineering old cave bear, as if the food sack were truly separate & we cared to get rid of the shame of so much perturbing concern about so small a matter.]]

With [Mr] the Don [Delaney] came [comes] two men, one of them an Indian [& a white man. The flock is to be moved at once & these men are] to assist in packing and driving [packing] etc [as we move camp] up the mountains [& now we go] toward[s] cloudland.

Never while anything is left of me [is left] shall [I forget] this first camp be forgotten [on Merced waters in Spring time. Its features are fairly grown] It has fairly grown into me, into me as part of my body. Not merely merely in memory pictures [on memories walls hanging against] on a surface [or even painted or burned into it], but part and parcel of [living love pervading filling] mind & body alike. That deep hopper like hollow [hiding place][hollow] where our beds were laid & where the corral was located] with its majestic trees through which all these dreamy nights the stars poured down [shone with] such telling beauty [& through which also came] sifting the clear amid the music [night songs] of the falls [cascades].

The high steep [wall-like] slope towards Brown's Flat [covered with so dense a chaparral of willow thatched with shaggy manzanita, ceanothus & dogwood chapparal [cornel it seemed thatched with it & Hard it was to force a way through up or down.] [A picture of wholesome] flowery fragrant exuberant wildness [[harsh & shaggy extending no invitations to heedless seekers or mere curiosity idlers Yet full of wealth of beauty little to be guessed from [outside] far views. The [bloom and] fragrance of bloom of so great [its broad] a fields of bushes]]