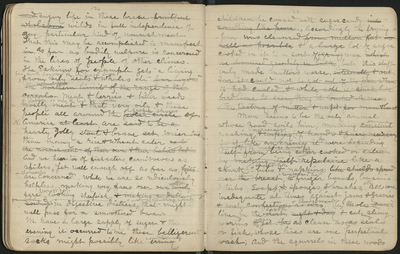 [and] enjoy life in these brave [fruitful wholesome] wilds in full independence of any particular kind of nourishment.

That this may be accomplished is manifest [in] as far as bodily welfare is concerned in the lives of people of other climes.

The Eskimo for example gets a living far north beyond the wheat line from oily seals & whales etc [far beyond the [wheat line] northern limit of the range of the cereals]. Meat & berries & bitter weeds & blubber or only the last for months [Mostly meat & that very oily,] & these people all around the frozen shores [polar circle] of N. [north] America [at least] are [said to be a] hearty jolly stout & brave [set]. Wiser too than many a rice & wheat eater [as to the nourishment of their own & their babies bodies]

And we hear too of fish-eaters, carnivorous as spiders, yet well enough off as far as stomachs [pits] are concerned, while we are so ridiculously helpless making wry faces over our [mutton] [wooly] fare lean or fat looking sheepish [& making a dull [grumble] [sounds] in digestive distress and making rumbling grumbling sounds that might well pass for [a] smothered ba-as.

children be coaxed with sugar candy [into something like peace]. Accordingly the frying-pan was cleansed [from mutton fat as well as possible] & a [large] lot of sugar cooked in it to a sort of [gray] wax [which we devoured greedily in bulk], but this stuff only made matters worse, [internally & out for it could not be got out of the pan when it had cooled, & while soft is stuck like birdlime to everything it touched. A mess still tasting of mutton & unfit for man & beast]

Man seems to be the only animal whose food soils him, making much [constant] washing necessary [& wiping of hands & face necessary As if like an enemy the [it] were defending [himself by making himself] itself from being either cooked or eaten by making itself repulsive like a skunk.] & shield-like bibs & napkins [like shields spread over the breast, &] reinforced by finger bowls, basins & tubs, soaps & sponges, & brushes, all are inadequate at times against jams & gravies [& such confections as ours] and bloody meat. [A] Moles [can] living[e] in the earth [dirt night & day] & eating slimy worms [&] are yet [be] as clean as [a] seals or fish whose lives are one perpetual wash; and the squirrels in these woods