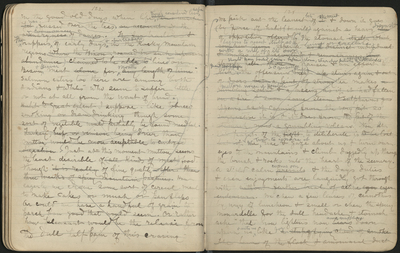 in the good old days, when life though considered less safe was [was unsafe yet] the less fussed over [the less] [on account of the ordinariness [commonness] of danger. The fur traders &] The trappers and fur traders of early days in the Rocky Mountain regions [where the Bison roamed in such impressive abundance claimed to be able to] lived on Bison & beaver meat [alone] for months [any length of time].

Salmon eaters too there are among both Indians & Whites who seem to suffer little or not at all from the want of bread.

[Habit to great extent I suppose, like tobacco smoking or dram drinking though some sort of vegetable would probably be found needful.

Turkey, beef, or venison being drier than mutton would be more acceptable to civilized digestion.] Just at this moment mutton seems the least desirable of [all kinds of meat] food though [it is really] of fine quality [[after these three weeks of spicy mountain pastures.] How [eagerly we crave] some sort of cereal meal to make cakes or mush or panflaps or could we have a handful of grain to parch How good that would seem. Or rather how pleasant would be the release from the dull half pain of this craving.]]

& makes its discontent & remonstrances very strongly felt. There is]] should have boiled greens, [ ], clover & starchy [petives] saxifrage & rootstocks nausea & an effort to kick the causing the offensive stuff [meat upstairs again & out of doors but a pint of strong] tea makes matters worse if possible [a rumbling sound & a hissing as if it had fallen on a fire & soon some steam & sulphurous gas appears as if coming from the very pit so suggestive it is, & it does from the pit of the stomach now a grumbling volcano. Now] At [this point of the fight to deliberate is to be lost but if] We try to ignore it, rise & gaze about us & turn our eyes to the mountains & climb doggedly up through the brush & rocks into the heart of the scenery.

A stifled calm comes on [prevails] & the days duties & even enjoyments are languidly got through with [without further trial of active eger eager endeavors.] We chew a few leaves of ceanothus by way of luncheon & smell or chew the spicy monardella for the dull headache & stomach ache that now lightens now comes muffling [bears] down upon us and into us like fog [a stupefying cloud of smoke

The baa of the flock & am[m]oniacal dust]