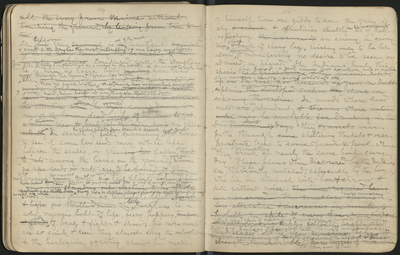 [all the way from Maine without touching the ground, by leaping from tree to tree.]

The California [big] Gray [Squirrel] is one of the most [a] beautiful [& next to the Douglass the most interesting of our neighbors] [animal] & next to the Douglas the most interesting of our hairy neighbors. as he is seen threading the branches of the live oaks or pines.] Compared with the Douglass he is twice as large but far less likely and influential as a worker in the woods and manages to make his way through the leaves and branches with [makes] far less stir than his small brother, [and is [a] much less influential animal] I never heard him bark at anything [else than] except our dogs. [[or mark of any kind on the world of woods. Seldom is he seen at all & never heard unless a dog should chance to attract his attention. Then [When] he would [may] come down to one of the lower dead limbs of [a pine] the tree to get a [clear] plain view & bark [and scold] at the intruder.]] He glides [silently] [i]In search of food he glides silently from branch to branch examining last year’s [old] cones to see if some few seeds may not be left between the scales, or gleans[ing] for fallen ones [seeds & nuts] among the leaves on the ground since [when no ripe seeds or nuts are to be found of the] none of the present season’s [years] crop is available. His tail floats not behind [him] now above. When level or gracefully curled like a wisp of summer cloud [light][radiant as thistle down] every hair in it’s place, clean and shining in spite of rough grimy work. [behind him every hair standing out electric & his whole]

His whole body seems about as unsubstantial as his tail [loose & light as thistle down]. The little Douglass is a solid vigorous bolt of life, fiery peppery, [temper & fond] full of brag & fight & show; his movements are so quick & keen they almost sting the onlooker & the harlequin gyrating show he makes

of himself turns one giddy to see. The gray is shy [& silent] & oftentimes stealthy in his movements as if half-expecting [the presence of] an enemy in every tree and bush & back of every log, wishing only to be let alone apparently & manifesting no desire to be seen, or admired, or feared. The Indians hunt this species for food. A good cause for caution not to mention other enemies – hawks, snakes, wildcats, etc. [as a great prize & this pursuit kept up on the race for thousands of years no doubt explains [in some measure] the developed caution they show in exposing themselves.] In woods where food [nuts are] is abundant [& streams where water water may be available for drinking in the dry [warm] [hot] [autumnal days] they [squirrels] wear paths through [some] sheltering thickets & over prostrate trees to some favorite pool where in hot dry weather they drink at nearly the same hour every day. These places when discovered by the Indians are said to be narrowly watched, especially by the boys, who lie in ambush with bow & arrow, & kill without noise. [The time required being unmeasured. The smaller species is more numerous less attractive & increases in numbers probably in spite of every foe - man wildcat

& rattlesnake. happy fellows bright and undiseased as the very sunshine, types of strength unweariable, pure nugget of mountain] But in spite of [ ] squirrels are happy fellows, forest darlings types of tireless life. Of all Nature’s wild beasts [tireless offspring of earth and sun] they seem to me the wildest [& best]