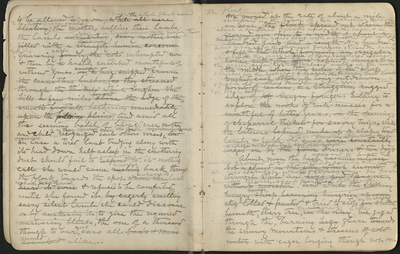 [to be allowed to go on, while all where bleating, the mothers] Soon the whole flock seemed to be hopefully excited, calling their lambs, the lambs replying in tones wonderfully human [answering, every mother voice filled with a strangely [strikingly] human concern] fondly quavering calls [fondly, the notes] interrupted now & then by a hastily snatched mouthful of withered grass [savory or a twigs snipped from the ceanothus bushes (as they streamed through the thickets which roughen the hills a few miles above [beyond] the edge of the smooth foothills bordering immediately upon the plains.] And amid all this seeming babel of ba-as as they streamed over the hills every mother and child recognized each others voices through brushy thickets &gulches. And in case a tired lamb trudging along with its head down half asleep in the smothering dust should fail to answer [respond to] its mother[s call she] would come running [rushing] back through the flock towards the spot whence its [where she] last response was heard [heard its voice] & refused to be comforted until she found it [by eagerly smelling every silent lamb she could discover or by awakening it to give the required answering bleat,] the one of a thousand though to our eyes & ears all seemed [baa's and maas sounded] alike.

The flock traveled [We moved] at the rate of about a mile an hour outspread in the form of an irregular triangle about a hundred yards wide at the base and a hundred and fifty yards long with a crooked, ever-changing point made up of the strongest foragers called ‘the leaders’ which with the most active of those scattered along the ragged sides of the main body, hastily exploring nooks in the rocks and bushes for [the best] grass and leaves. The sleepy tired lambs and feeble old mothers dawdling in the rear were called ‘the tail end’. [The flock spread out where the ground was open to a width of about a hundred yards and a length of a hundred

& fifty - the whole forming an irregular cone with the base behind, densest in the middle, where the sides of the sheep touched each other, a long outdrawn point of leaders, & a straggling ragged edge of hungry foragers halting to explore the nooks of rock-masses for a mouthful of better grass, or the opening of chaparral thickets for savory twigs while the loiterers behind made up of sleepy tired lambs & feeble old ewes mothers dawdling in the rear made up what is called the tail end of the flock were constantly urged on by the four drivers & two dogs]

About noon the heat was hard to bear and the rocky ground was like white hot colas & the glowing sky was strangely white & dim [opaque]. The poor hungry thirsty sheep panted pitifully. [became intense Not a cloud in the sky which seemed strangely white and hazy and opaque without moisture. And while the choking hungry sheep becoming hungrier at every step lolled & panted] & tried to stop in the shade [for shelter beneath] of every tree they came to [in the way]. While we gazed through the dim burning [hazy] glare toward the snowy mountains & streams [of cold water] with eager longing though not one