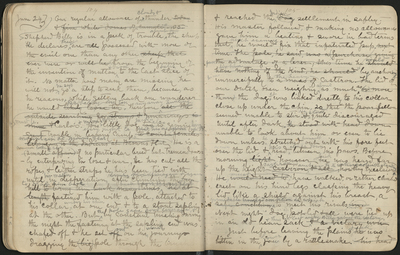 Shepherd Billy is in a peck of trouble about [his] the sheep he declares they are [all] possessed with more of the evil one than any other [sheep that ever were or will be] from the beginning of the invention of mutton and wool to the last batch [slice] of it. No matter how many are missing he will not he says go a step to seek them because as he reasons while getting back one wanderer he would probably lose ten [likely loose [sic] ten]. Therefore run away hunting [all the outside searching for strays & runaways is mine &] must be Carlo's and mine. Billy’s [His] little dog, Jack, is also [too is] giving him

[great] trouble in leaving camp every night to visit his neighbors up the mountain at Brown’s Flat. [to court females belonging to the Indians at Browns Flat]. He is a common looking cur, [small affair] of no particular breed but tremendously enterprizing [sic] in love & war. He has cut all the ropes & leather straps he has been tied with until his master in desperation after climbing the brushy mountain again & again to drag him back [big hill to bring him back many times he at length] fastened him with a pole, attached to his collar under his chin at one end & to a stout sapling at the other. But the pole gave good leverage and by constant twisting during the night the fastening at the sapling end was chafed off & he set out [off] on his usual journey[s] dragging the [big] pole through the brush

His master followed, & making no allowances gave him a beating & swore in bad terms that next evening he would fix that infatuated pup [[next time. The pole, he said, was a purchase giving [gave] the advantage of a lever; this time he [would] should have nothing of the kind, he should]] by anchoring him unmercifully to the heavy [a mass of] cast iron [. The] lid of our Dutch over weighing about as much as [or more than] the dog. It was linked directly to his collar close up under the chin, so that the poor fellow seemed unable to stir. [&] He stood quite discouraged until after dark [he stood with head down] unable to look about him or even to lie down unless he stretched himself out with his fore feet across [over] the lid & his head close down between his paws. Before morning [light] however Jack [he] was heard far up the height, cast iron anchor to the contrary notwithstanding [& all] howling Excelsior

He must [would need to] have walked, or rather climbed erect on this hind legs clasping the heavy lid like a shield against his breast, a formidable ironclad condition in which [safe condition] to meet his rivals. [in.]

Next night dog, pot lid & all were tied up in an old bean sack & thus at last angry Billy gained the victory. [a victory won]