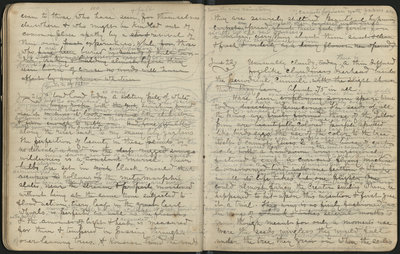 [even to those who have seen and felt for themselves elsewhere & who might be kindled out of commonplace apathy by a stir & revival of their own [past] experiences, while [for] those who are [have been] buried in civilization may be said to be dead [and no argument may be got into a dead man] [rounds of dull town-duty, trading & building almost before they were born of course no words will have effect by any chance whatever]

June 21} [Trans to pg 101] Cloudland today is only a solitary [pile of] white mountain but it is so enriched [bossy rocks] with [the rich] sunshine the tones of color on it’s big domed head and bossy out-buldging ridges and in the hollows and ravines between them are [a] ineffably fine. It’s worth going round the world to see. [poured] over it making it look in texture like alabaster & firm enough to walk on. [Had fine] XX [walk[ed]] Sauntered along the river-bank to my [many] lily gardens

The perfection of beauty in these lilies [plants] of the [so delicate a kind in the deep rugged savage] wilderness is a never ending source of admiration and wonder [constant marvel]. Their rhizomes [bulbs] are set in [rich] black mould accumulated in [that occupies a] hollows of [in] the metamorphic slates beside the pools where they are well watered [near the stream & properly moistened] without being [at the same time] subjected to flood action. Every leaf in the [great] level whorls around the tall polished stalks is as finely finished as the petals [is perfect as well as the flowers] & the [amount of] light & heat required is measured for them & tempered in passing through the branches of over leaning trees [&] However strong [loud] the winds

from the noon rainstorms they are securely sheltered. Beautiful hypnum carpets bordered with ferns are [carpet] [are] spread beneath them [bordered with ferns] [about their feet, & ferns for a border], violets too and a few daisies, everything about them sweet [& clean] & fresh like themselves [are born] [& orderly as a dewy flower new opened.]

June 22} Unusually cloudy [today]. There is a thin diffused fog-like cloud[iness] overhead besides the periodical shower-bearing cumuli [with the slight shower that they bear]. About .75 in all.

XX Trans ahead Have been examining pine cones. The seeds of all the species I have seen are beautifully colored and curiously shaped and winged with reference to the distribution of the forest. Those of the yellow pine, the prevailing species here, are purplish brown spotted like birds eggs. The single wing is ingeniously attached to the seed and so curved that in falling the seed is rapidly whirled and sustained long enough to allow the winds to carry them considerable distances from the parent tree. If wingless they would of course fall under their mothers’ leafy skirts where they would have but little chance to grow up. They are a kind of one winged one feathered bird that take but one flight and we may [employing some spare time today dissecting pine cones. The seeds of all the pines are finely formed those of the Yellow Pine are beautifully colored purple spotted like birds eggs, the use of the color to the tree itself I cannot guess. & [or 2 or Q or I?] at the base of each scale with a handsome wing ingeniously fastened to each a curious flying machine a one-winged bird with one feather & which in all its life takes but one flight. One could] almost fancy the Creator smiling when he happened to hit upon this invention & first gave This curious it a trial. [This wing of every species I have seen is as finely fashioned [& colored] as [colored as] the wings of a [birds] hawk & takes [requires two years] [several months to grown though meant for only a moment’s use Were the seeds wingless they would of course fall