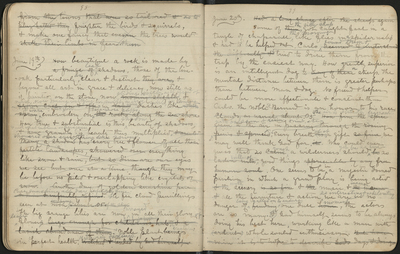 [from the towns that are so tailored & plug hatted they frighten the birds & squirrels, & make one fancy that even[en] the trees would shake their limbs in fear.]

June 19th} How beautiful a rock is made by [a fringe of] leaf shadows, those of the live-oak particularly, are clear & distinct [they are,] & beyond all art in grace & delicacy, now still as if painted on the stone, now gliding softly as if afraid of noise, now dancing waltzing in swift merry swirls, or stomping on and off the sunny rock floor [moving slightly, & again cast on & off] in quick [rapid] dashes like [white] [spray] wave embroidery on sea-shore cliffs [the rocks along the sea-shore]. How true & substantial is this shadow beauty [of shadows, & how grandly] and with what sublime extravagance is beauty thus multiplied, showered over everything like snow. [& created. Many a shadow has every tree & flower of all these fertile landscapes, showered over everything like snow & rain, but so dim are our eyes we see but one at a time, though they may lie before us piled & overlapping like crystals of snow. Another day of golden sunshine pure] Pure sunshine all day infinitely fine [& thin & infinitely refined]. A few cloud pencillings seen at noon [occupying] [about .05 of the sky.]

The big orange lilies are now arrayed in all their glory of leaf and flowers [large enough for [baby’s bonnet] children’s hats, & a lavish abundance of them]. Noble plant creations [beings] in perfect health, Nature’s darlings. [watched & tended by God himself.]

June 20th} [Had a long chase after the sheep again] Some of the silly sheep [them] got caught fast in a tangle of chaparall [chaparral] this morning like flies in spider web[s] & had to be helped out. Carlo found them and [seemed to understand the difficulty &] tried to drive them from the trap by the easiest way. How [greatly] superior is an intelligent dog to [any of these] a sheep. The mental distance between them is greater perhaps than between man & dog. No friend & helper could be more affectionate & constant than Carlo. The noble St. Bernard is an honor to his race. [Clouds as usual about .05.] The air is distinctly fragrant with balsam and resin and mint, etc. [How fine the spice given to the air in passing through the rosiny pines & spruces.] Every breath of it is a gift [so fine] we may well thank God for [it]. Who could ever guess that so rough [calm] a wilderness should be so fine [be] so full [laden] with good things [appreciable by any free human soul]. One seems to be in a majestic domed pavilion in which a grand play is being acted with [& the] scenery [is so fine] & [the] music & [the] incense [&] all the furniture & action so interesting and exhilarating, we are in no danger of being called to endure [finding] one dull moment [hour], the actors are so many [&] God himself seems to be always doing his best here, working like a man with [ardent] whole souled enthusiasm. [But how vain it is to hope to describe God’s days & doings]